One of the frustrations of the outsourcing debate is the lack of hard numbers. Nobody really knows how many jobs have been outsourced overseas. Unlike bushels of soybeans or slabs of steel, jobs are not counted at a dock and loaded on a ship for India or China. The best estimates from the industry are that perhaps 300,000 to 400,000 jobs previously performed in the United States are now done overseas through contractors. A recent update of the much-cited 2002 study by Forrester Research Inc. projects that the number of U.S. jobs outsourced abroad will increase from an estimated cumulative total of 315,000 in 2003 to 3.4 million by 2015.[5] That would mean an average of 257,000 additional jobs outsourced each year.

Even if accurate, those numbers are just a few drops in the big bucket of an $11 trillion economy that employs 138 million people and creates and destroys millions of jobs every month. Even in times of healthy employment growth, 350,000 people file for unemployment insurance every week. The U.S. Department of Labor reports that during the past decade our economy created an average of 32.8 million new jobs each year while eliminating 31.0 million, for a net annual gain of 1.8 million.[6] If only half, or 15.5 million, of those annual job losses are permanent, that would mean that the quarter of a million jobs supposedly lost from foreign outsourcing each year account for less than 2 percent of the total jobs eliminated each year. Jobs lost to outsourcing are but a small rivulet in the torrential “job churn” normal for a dynamic market economy such as ours.

Far more Americans lose their jobs to technology, domestic competition, and changing consumer tastes than to foreign outsourcing or other forms of international competition. Think of all the former typists, telephone operators, and bank tellers whose work has been replaced by computers and other machines. For example, Kodak announced in January of this year that it would lay off as many as 15,000 workers, or one-fifth of its global work-force, not because of foreign competition but because the popularity of digital cameras have depressed the sale of film. Montgomery Ward, K-Mart and other retailers have laid off tens of thousands of workers in recent years, not because of foreign competition but because of domestic competition from rivals such as Wal-Mart. Between 1988 and 2000, a net half-million jobs for typists and word processors were eliminated, not because they were outsourced but because they were made redundant by computers.[7] But it appears that job losses catch the attention of politicians only if they can be blamed on a foreign bogeyman.

Even the recent job losses in information technology have not been driven primarily by foreign outsourcing. Instead of blaming IT providers in India, displaced high-tech workers should blame the bursting of the dot-com and telecom bubbles in 2000, the subsequent plunge in the NASDAQ, the recession and decline of business investment in 2001, the September 11 terrorist attacks and the uncertainty that followed, corporate scandals, and slow growth abroad. 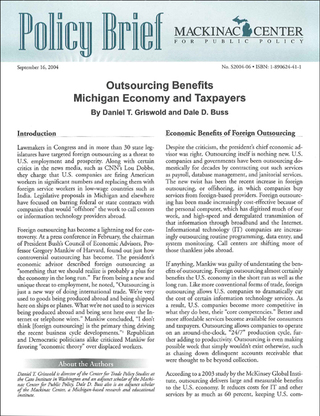