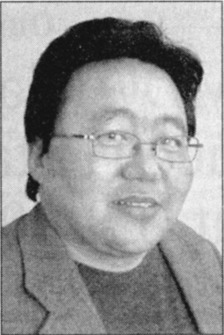 Since 1998, when the Mackinac Center began holding its semi-annual “leadership conference” for think tank staff and executives, we have hosted prominent individuals from dozens of states and countries. It's part of our commitment to build the movement for liberty and free markets wherever and whenever possible.

One of the most interesting and prestigious conference participants was Elbegdorj Tsakhia ("E.B."), who attended in May 2003. E.B. had been a young leader of the anti-communist underground in Mongolia that eventually tossed out that country’s dictatorship in the early 1990s. For a brief period later that decade, he became prime minister of Mongolia; afterward, he started a free-market organization in Ulan Bator called the Liberty Institute.

With his endorsement, four more Mongolians attended our conferences in October 2003 and April 2004. As you'll read in the Midland Daily News article below, our friend E.B. recently became prime minister again! This represents another great victory for all of us who believe in limited government and a free society.

Lawrence W. Reed is president of the Mackinac Center for Public Policy, a research and educational institute headquartered in Midland, Mich.

Mongolia to Midland – and back

Mongolia's new prime minister is a former dissident who studied in Midland at the Mackinac Center for Public Policy for several days in May 2003.

Tsakhilganiin Elbegdor, 41, is also known as Elbegdor Tsakhia and – in the United States – as E.B.

Mackinac Center president Lawrence W. Reed said he has accepted E.B.'s invitation to visit him in 2005 – most likely in May.

The Harvard-educated son of a herdsman, E.B. has returned to the prime minister's job he held for eight months in 1998.

To learn more about running think tanks like the Mackinac Center, he attended the center's leadership conference.

The Mackinac Center is a research and education organization with a free-market perspective.

Reed quoted a handwritten card E.B. sent to him a few days after he was in Midland.

"America has the most important thing to offer the world. This is freedom. The Mackinac Center makes it ring and expand. ... Problems that face America and Mongolia may differ but the solutions are the same: More freedom, more trust in the abilities of free people in a free nation. The Mackinac Center made me more rich. Rich with ideas, rich with friends, and rich with knowledge. I will always think of you as kind friends who took a real interest in my past and future."

Reed added: "E.B. is fond of quoting someone we can loosely refer to as one of his 'predecessors,' Genghis Khan. Eight hundred years ago, Khan said 'It is easy to conquer the world with a horse; what's challenging is to dismount and try to govern.' That's what E.B. will now do, for a second time, as Mongolia's leader. I predict a long and fruitful prime ministership."

He will lead Mongolia's first coalition government since the end of communist rule in 1990.

The Mongolian People's Revolutionary Party, which led the last government, agreed to form the "Grand Coalition Government" with the former opposition after both failed to win enough seats in June 27 elections to form a government on their own.

The agreement followed weeks of legal wrangling over elections that were a stunning setback to the People's Revolutionary Party, which had held all but four seats in the last parliament. Both sides accused each other of cheating, and the first two attempts to open the new parliament failed after Revolutionary Party lawmakers refused to attend.

E.B. took part in the movement that led to the end of one-party rule in 1990.

The former military reporter for the Mongolian newspaper Red Star earned a master's degree in public administration in 2002 from Harvard's John F. Kennedy School of Government. He was forced to cut short his first term as prime minister after the government, led by former pro-democracy activists, was shaken by a banking scandal.

The MPRP, which led Mongolia under communism, has 36 seats in the new parliament, the Democrats took 34, and four seats went to smaller parties and independents. Courts are reviewing results in two districts after allegations of cheating.

Posts in the new Cabinet are expected to be split between the Revolutionary Party and the opposition.

"Poverty is a big problem," E.B. said of his largely agricultural homeland, while he was in Midland. Sandwiched between China and Russia, Mongolia has 30 million cattle and 2 1/2 million people.

For some of his countrymen, "It's very difficult to live in a free society," after having all decisions made by "the bosses," he said.

E.B. said he was trying to persuade Mongolians that excessive government intervention in people's lives is bad.

Michael Kohn of The Associated Press contributed to this report.