Binding arbitration of collective bargaining disputes was introduced in Michigan in 1969. It seems to have been a contributing factor in the decline of Michigan's largest city. It has been denounced by one of its chief architects. Thirty years later it remains a slow and expensive process. Currently it applies only to police and firefighters at the local level, and to the state police. Proposal 3 would extend this regime to the entire state government.

The case of Detroit is an example of what can happen when outside arbitrators decide the terms of employment for government workers. There is little reason to believe that what happened to Detroit could not happen on a statewide scale. The arbitration procedure has not changed significantly since 1978, when a controversial arbitrator's ruling led to large-scale police layoffs. The broad reach of Proposal 3 would increase the risk that an arbitration panel's award could cause a budgetary crisis.

It is unclear from the language of Proposal 3 exactly what its impact would be, which would leave a wide range of issues for the courts to decide. And while arbitration typically serves as a means of avoiding public sector strikes, the proposal's language actually opens the door to the possibility of strikes.

The State of Michigan, under the present CSC arrangement, compensates its employees well compared to the private sector and nearby states. Surveys commissioned by both the Office of the State Employer and the American Federation of Teachers show that most categories of state employees in Michigan receive better pay and benefits than their counterparts in other states. Proposal 3 does not seem to be needed to assure fair compensation of state employees.

Michigan's experience with arbitration has shown that arbitrators' awards to state police are on average one or two percentage points more generous than those gained by other state employees. Passage of Proposal 3 could add $30 to $60 million to the state budget, an expense which would probably result in budget cuts in other areas, tax increases, or both.

Besides the risk of overly generous arbitration awards, the process of arbitration in Michigan is slow and cumbersome compared to the present system. Arbitration delays of over a year are commonplace, with awards often made after preceding contracts expire. These late decisions would likely create uncertainty for both the state and its employees, and have a negative, not positive, effect on employees' work.

By contrast, the existing Civil Service system has performed admirably, providing state employees with fair, even generous, wages and benefits, while keeping contracts up to date and preserving the state's ability to shape a workforce that meets the needs of its citizens. 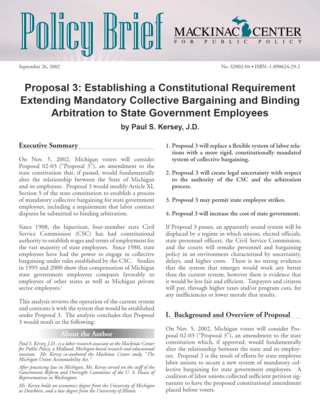