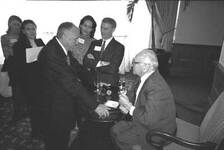 The following article appears in the spring 2002 issue of IMPACT!, the quarterly newsletter of the Mackinac Center for Public Policy.

Competition among schools is the key to successful education reform, according to Nobel Laureate Dr. Milton Friedman, the keynote speaker at a recent conference held in Salt Lake City and co-sponsored by the Mackinac Center for Public Policy.

The Jan. 18 conference brought together national experts on education reform, including Friedman and Mackinac Center Director of Leadership Development Mary Gifford, to discuss ways of expanding educational choice and freedom through such instruments as tax credits or vouchers.

Gifford explained to the crowd of roughly 300 state and national officials, legislative staffers, parents, and education reformers and activists how tuition tax credits have increased opportunities for low-income and other students in such states as Arizona and Pennsylvania.

Friedman predicted that President Bush's recently signed education bill will have little positive impact because it increases spending without doing much to expand school choice.

Other featured speakers included panelists from co-sponsoring organizations American Legislative Exchange Council, the Milton and Rose Friedman Foundation, and the Heritage Foundation.  Former Arizona Superintendent of Public Instruction Lisa Keegan, with whom Gifford worked closely as director of the Goldwater Institute's Center for Market-Based Education, updated attendants on the continued success of that state's education tax credit at fostering a true education marketplace.

Education Excellence Utah organized the conference as part of its effort to advance school choice in the Beehive State.  The group is promoting the "Utah Education Investment Act," a bill that incorporates features of the Mackinac Center's Universal Tuition Tax Credit proposal.  The bill would allow for a credit of up to $2,100 per student for individual taxpayers who contribute to tuition scholarship programs.