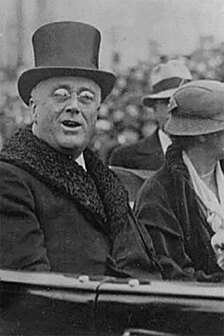 Smoot-Hawley by itself should lay to rest the myth that Hoover was a free market practitioner, but there is even more to the story of his administration's interventionist mistakes. Within a month of the stock market crash, he convened conferences of business leaders for the purpose of jawboning them into keeping wages artificially high even though both profits and prices were falling. Consumer prices plunged almost 25 percent between 1929 and 1933 while nominal wages on average decreased only 15 percent - translating into a substantial increase in wages in real terms, a major component of the cost of doing business. As economist Richard Ebeling notes, "The 'high-wage' policy of the Hoover administration and the trade unions ... succeeded only in pricing workers out of the labor market, generating an increasing circle of unemployment."[11]

Hoover dramatically increased government spending for subsidy and relief schemes. In the space of one year alone, from 1930 to 1931, the federal government's share of GNP soared from 16.4 percent to 21.5 percent.[12] Hoover's agricultural bureaucracy doled out hundreds of millions of dollars to wheat and cotton farmers even as the new tariffs wiped out their markets. His Reconstruction Finance Corporation ladled out billions more in business subsidies. Commenting decades later on Hoover's administration, Rexford Guy Tugwell, one of the architects of Franklin Roosevelt's policies of the 1930s, explained, "We didn't admit it at the time, but practically the whole New Deal was extrapolated from programs that Hoover started."[13]

Though Hoover at first did lower taxes for the poorest of Americans, Larry Schweikart and Michael Allen in their sweeping "A Patriot's History of the United States: From Columbus's Great Discovery to the War on Terror" stress that he "offered no incentives to the wealthy to invest in new plants to stimulate hiring." He even taxed bank checks, "which accelerated the decline in the availability of money by penalizing people for writing checks."14

In September 1931, with the money supply tumbling and the economy reeling from the impact of Smoot-Hawley, the Fed imposed the biggest hike in its discount rate in history. Bank deposits fell 15 percent within four months and sizable, deflationary declines in the nation's money supply persisted through the first half of 1932.

Compounding the error of high tariffs, huge subsidies and deflationary monetary policy, Congress then passed and Hoover signed the Revenue Act of 1932. The largest tax increase in peacetime history, it doubled the income tax. The top bracket actually more than doubled, soaring from 24 percent to 63 percent. Exemptions were lowered; the earned income credit was abolished; corporate and estate taxes were raised; new gift, gasoline and auto taxes were imposed; and postal rates were sharply hiked.

Can any serious scholar observe the Hoover administration's massive economic intervention and, with a straight face, pronounce the inevitably deleterious effects as the fault of free markets? Schweikart and Allen survey some of the wreckage:

By 1933, the numbers produced by this comedy of errors were staggering: national unemployment rates reached 25 percent, but within some individual cities, the statistics seemed beyond comprehension. Cleveland reported that 50 percent of its labor force was unemployed; Toledo, 80 percent; and some states even averaged over 40 percent. Because of the dual-edged sword of declining revenues and increasing welfare demands, the burden on the cities pushed many municipalities to the brink. Schools in New York shut down, and teachers in Chicago were owed some $20 million. Private schools, in many cases, failed completely. One government study found that by 1933 some fifteen hundred colleges had gone belly-up, and book sales plummeted. Chicago's library system did not purchase a single book in a year-long period.[15]