"The greatest spending administration in all of history"

PRESIDENT HERBERT HOOVER is mistakenly presented in standard history texts as a laissez-faire president, but he signed into law so many costly and foolish bills that one of Franklin Roosevelt’s top aides later said that “practically the whole New Deal was extrapolated from programs that Hoover started.”
Library of Congress

Did Hoover really subscribe to a "hands-off-the-economy," free-market philosophy? His opponent in the 1932 election, Franklin Roosevelt, didn't think so. During the campaign, Roosevelt blasted Hoover for spending and taxing too much, boosting the national debt, choking off trade, and putting millions on the dole. He accused the president of "reckless and extravagant" spending, of thinking "that we ought to center control of everything in Washington as rapidly as possible," and of presiding over "the greatest spending administration in peacetime in all of history." Roosevelt's running mate, John Nance Garner, charged that Hoover was "leading the country down the path of socialism."[8] Contrary to the conventional view about Hoover, Roosevelt and Garner were absolutely right. 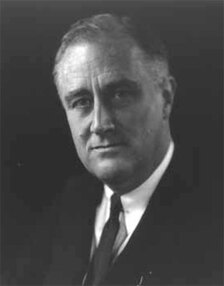 AMERICANS VOTED for Franklin Roosevelt in 1932 expecting him to adhere to the Democratic Party platform, which called for less government spending and regulation.
Library of Congress

The crowning folly of the Hoover administration was the Smoot-Hawley Tariff, passed in June 1930. It came on top of the Fordney-McCumber Tariff of 1922, which had already put American agriculture in a tailspin during the preceding decade. The most protectionist legislation in U.S. history, Smoot-Hawley virtually closed the borders to foreign goods and ignited a vicious international trade war. Professor Barry Poulson describes the scope of the act:

The act raised the rates on the entire range of dutiable commodities; for example, the average rate increased from 20 percent to 34 percent on agricultural products; from 36 percent to 47 percent on wines, spirits, and beverages; from 50 to 60 percent on wool and woolen manufactures. In all, 887 tariffs were sharply increased and the act broadened the list of dutiable commodities to 3,218 items. A crucial part of the Smoot-Hawley Tariff was that many tariffs were for a specific amount of money rather than a percentage of the price. As prices fell by half or more during the Great Depression, the effective rate of these specific tariffs doubled, increasing the protection afforded under the act.[9]

Smoot-Hawley was as broad as it was deep, affecting a multitude of products. Before its passage, clocks had faced a tariff of 45 percent; the act raised that to 55 percent, plus as much as another $4.50 per clock. Tariffs on corn and butter were roughly doubled. Even sauerkraut was tariffed for the first time. Among the few remaining tariff-free goods, strangely enough, were leeches and skeletons (perhaps as a political sop to the American Medical Association, as one wag wryly remarked).

Tariffs on linseed oil, tungsten, and casein hammered the U.S. paint, steel and paper industries, respectively. More than 800 items used in automobile production were taxed by Smoot-Hawley. Most of the 60,000 people employed in U.S. plants making cheap clothing out of imported wool rags went home jobless after the tariff on wool rags rose by 140 percent.[10]

Officials in the administration and in Congress believed that raising trade barriers would force Americans to buy more goods made at home, which would solve the nagging unemployment problem. But they ignored an important principle of international commerce: Trade is ultimately a two-way street; if foreigners cannot sell their goods here, then they cannot earn the dollars they need to buy here. Or, to put it another way, government cannot shut off imports without simultaneously shutting off exports.