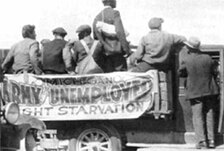 UNEMPLOYMENT SKYROCKETED after Congress raised tariffs and taxes in the early 1930s and stayed high as policies of the Roosevelt administration discouraged investment and recovery during the rest of the decade.
Michigan State Archives

A popular explanation for the stock market collapse of 1929 concerns the practice of borrowing money to buy stock. Many history texts blithely assert that a frenzied speculation in shares was fed by excessive "margin lending." But Marquette University economist Gene Smiley, in his 2002 book "Rethinking the Great Depression", explains why this is not a fruitful observation:

There was already a long history of margin lending on stock exchanges, and margin requirements — the share of the purchase price paid in cash — were no lower in the late twenties than in the early twenties or in previous decades. In fact, in the fall of 1928 margin requirements began to rise, and borrowers were required to pay a larger share of the purchase price of the stocks.

The margin lending argument doesn't hold much water. Mischief with the money and credit supply, however, is another story.

Most monetary economists, particularly those of the "Austrian School," have observed the close relationship between money supply and economic activity. When government inflates the money and credit supply, interest rates at first fall. Businesses invest this "easy money" in new production projects and a boom takes place in capital goods. As the boom matures, business costs rise, interest rates readjust upward, and profits are squeezed. The easy-money effects thus wear off and the monetary authorities, fearing price inflation, slow the growth of, or even contract, the money supply. In either case, the manipulation is enough to knock out the shaky supports from underneath the economic house of cards.

One prominent interpretation of the Federal Reserve System's actions prior to 1929 can be found in "America's Great Depression" by economist Murray Rothbard. Using a broad measure that includes currency, demand and time deposits, and other ingredients, he estimated that the Fed bloated the money supply by more than 60 percent from mid-1921 to mid-1929.[3]; Rothbard argued that this expansion of money and credit drove interest rates down, pushed the stock market to dizzy heights, and gave birth to the "Roaring Twenties."

Reckless money and credit growth constituted what economist Benjamin M. Anderson called "the beginning of the New Deal"[4] — the name for the better-known but highly interventionist policies that would come later under President Franklin Roosevelt. However, other scholars raise doubts that Fed action was as inflationary as Rothbard believed, pointing to relatively flat commodity and consumer prices in the 1920s as evidence that monetary policy was not so wildly irresponsible.

Substantial cuts in high marginal income tax rates in the Coolidge years certainly helped the economy and may have ameliorated the price effect of Fed policy. Tax reductions spurred investment and real economic growth, which in turn yielded a burst of technological advancement and entrepreneurial discoveries of cheaper ways to produce goods. This explosion in productivity undoubtedly helped to keep prices lower than they would have otherwise been.

Regarding Fed policy, free-market economists who differ on the extent of the Fed's monetary expansion of the early and mid-1920s are of one view about what happened next: The central bank presided over a dramatic contraction of the money supply that began late in the decade. The federal government's responses to the resulting recession took a bad situation and made it far, far worse.