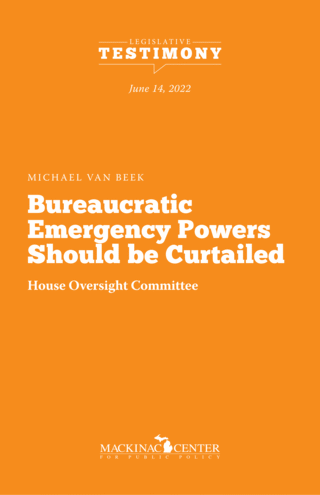 Bureaucratic Emergency Powers Should be Curtailed

The following is testimony submitted to the House Oversight Committee by Michael Van Beek on June 14, 2022.

Good afternoon, committee members. My name is Michael Van Beek, and I’m the director of research at the Mackinac Center for Public Policy. I’m here today to support and explain the origin of these 31 bills.

I became interested in emergency powers when the state used them in unprecedented ways in 2020. Regardless of whether they agreed or disagreed with the governor’s orders, most people did not know these powers even existed, and a controversy immediately arose regarding the legality of these state actions. As a result, Michigan residents were subjected to months of constantly shifting novel laws, causing much confusion. This package of bills aims to prevent this type of legal uncertainty in case of future emergencies.

These bills originated from research I did on instances where a Michigan statute empowers the executive branch in times of emergency to unilaterally create mandates and rules that have the force of law. There are more than 30 such grants of power. They address a variety of issues, including plant diseases, Medicaid payments to medical providers, dry cleaning, mobile home licensing, adulterated food products, metal and coal mining, and much more.

The design of these statutes varies in significant ways. Some clearly specify under what circumstances they may be used, what type of actions may be taken and for how long these powers may last. Others are much less clear and provide virtually no guidance on how they should be used.

By comparing and analyzing these existing statutes, and informed by the Michigan Supreme Court’s decision concerning Gov. Whitmer’s use of emergency powers, I identified four essential elements of good emergency power laws: 1) a trigger, 2) a scope of authority, 3) a durational limit and 4) procedural requirements.

A trigger describes the conditions that must be met before these powers can be used: an imminent danger at a workplace or a newly discovered harmful substance, for example. A scope of authority specifies the actions that the state may take, such as compelling people to vacate a dangerous area or requiring a business to cease certain operations. A durational limit states how long these powers and actions may last. Finally, procedural requirements constrain the exercise of unilateral authority — requiring the executive branch to report or involve other branches of government in the process of exercising these powers, for example.

The proposed changes in these 31 bills would create consistency across state statute. The most common fix is to add a durational limit and procedural requirements, such as legislative reporting. These bills aim to reduce the legal controversy that might result from use of these powers in the future.

In addition to these reforms, some bills in this package repeal existing emergency powers currently in statute. It was discovered that many of these laws are antiquated or duplicative. For instance, some emergency powers regarding insurance and banking were created during the Great Depression and are incompatible with modern practice and with the modern regulatory and legal environment. Other statutes grant powers to departments that they are already possess via other laws. For most of these laws, there is no record of them ever being used. Repealing these statutes is an act of good governance, cleaning up Michigan law and reducing the chance that one of these powers is misused.

Emergency powers are important and necessary. But they do need guardrails, especially considering that they would be unconstitutional without the emergency conditions. This package of bills would make Michigan’s emergency powers more consistent and clearer, helping prevent misuse and legal uncertainty about their application.

Thank you for your attention to this issue, and I’m happy to take any questions that you might have.

Michael Van Beek is director of research for the Mackinac Center for Public Policy.