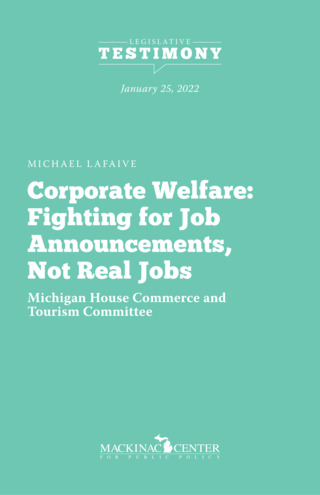 The following is testimony submitted for presentation to the Michigan House Commerce and Tourism Committee by the Mackinac Center’s Michael LaFaive on January 25, 2022.

Thank you for allowing me to testify and do so from my home in Traverse City.

This committee is considering legislation to re-create the Michigan Employment Opportunity Program, or MEOP. I say re-create intentionally because about 90% of its language is cribbed from the expired Good Jobs for Michigan program, which itself contained at least 12 sections (and ideas) blithely copied over from the state’s defunct MEGA program. In other words, these two bills are new wine in 27-year-old wineskins.

Real-world analysis by scholars using actual employment data from subsidized corporations inside and outside the Great Lakes State demonstrated repeatedly that programs like MEOP are very ineffective. MEOP is also expensive and lacking even the basic transparency and accountability features of other company-specific incentive programs. Lawmakers should oppose giving up another $300 million to big corporations — as MEOP appears ready to do.

The “Promoting Employment Across Kansas,” or “PEAK” program, is a Kansas-specific tax capture program designed just like the MEOP. Economist Nathan Jensen has measured employment changes at firms subsidized by PEAK and compared them to like firms in Kansas that were not subsidized. He found that the firms receiving PEAK subsidies performed no better on job creation than unsubsidized ones.

In their study, “Striking a Balance,” three university scholars collected 2,400 incentive deals across 35 states and then compared the performance of those incentivized establishments to like ones that were unsubsidized. The authors concluded that the employment impacts at incentivized establishments was — and I quote — “starkly negative.” These are not the only studies of their kind. My 2020 study with Michael Hicks uses a similar methodology to track up to 2,300 Michigan-specific deals back to 1983. We found a zero to net negative impact across nine program or program areas.

We also found that less than 1% of all net new jobs coming into Michigan between 1990 and 2015 were a result of business moves into the state. Only a microscopic fraction of those businesses was approved for a state incentive. An incentive was “necessary” for an even smaller fraction. Economist Timothy Bartik estimates that between 75% and 98% of firms that expand, relocate or stay “would have made a similar decision ... without the incentive.”

In other words, the subsidy game played by states may create more job announcements than real jobs, an assertion also supported by scholarship.

I emphasize the studies above in part due to the tiresome talking point used by proponents of subsidy programs like MEOP. They repeat endlessly that these analyses are just “ivory tower” or “philosophical” or “ideological.” It is “they,” they claim, who work in the real world. This assertion is undermined by scholars’ use of actual employment measures at subsidized companies. In addition, I have yet to see supporters of programs like this show their own independent scholarly analysis as evidence of their success. They can’t because so little exists. Instead they rely on their own opinions and the self-serving public relations efforts of professional associations.

Instead of creating another subsidy program, legislators should take a “fair field and no favors” approach to economic development and focus their efforts on improving Michigan’s mediocre overall business climate. The first steps of such an effort would provide across-the-board personal and corporate income tax cuts, repair our roads faster than they fall apart, make it easier for licensed professionals in other states to work in Michigan, and focus on energy reliability and affordability.

Michael LaFaive is the senior director of the Morey Fiscal Policy Initiative at the Mackinac Center for Public Policy.