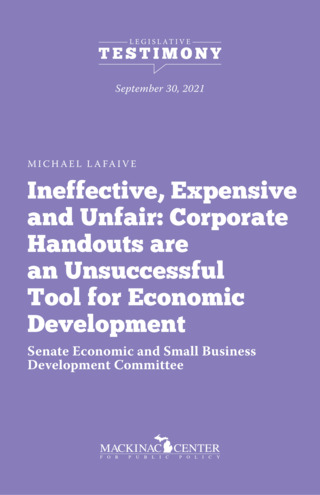 Ineffective, Expensive and Unfair: Corporate Handouts are an Unsuccessful Tool for Economic Development

The following is testimony submitted for presentation to the Senate Economic and Small Business Development Committee by the Mackinac Center’s Michael LaFaive on September 30, 2021.

Good afternoon. My name is Michael LaFaive. I am the senior director of the Morey Fiscal Policy Initiative at the Mackinac Center, a 501(c)(3), free-market research institute based in Midland, Mich. Thank you for the opportunity to lay out the reasons this committee should reject Senate Bill 615.

The Michigan Employment Opportunity Program — Senate Bill 615 — is an attempt to rebirth the “Good Jobs for Michigan” program, which the Michigan Senate rightly allowed to expire two years ago. Of the bill language in SB 615, about 90% is copied and pasted directly from GJFM.

Corporate handout programs have been shown by independent academic scholars to be ineffective and expensive. They are fundamentally unfair on their face.

The Promoting Employment Across Kansas program is structured similarly to SB 615. Its performance was studied in 2014 using a commercially available jobs database known as “NETS.” The study compared the performance of Kansas companies with PEAK deals to similar companies in Kansas that were not subsidized. The research found that subsidized companies were no more likely to create jobs than those that didn’t get subsidies. This echoes the results of a large academic review of hundreds of studies that concluded “economic development incentives have little or no impact on firm location and investment decisions.”

The NETS database has been used in larger studies and in one case that looked at thousands of deals — 180 from Michigan — across 35 states found that employment growth at subsidized firms was 3.7% slower than like firms that had not been subsidized.

The Mackinac Center has likewise used the NETS database. In 2020, we published a study that tracked employment at 2,300 firms going back to 1983. Across nine program or program areas, we found five had no impact, one that was explicitly negative, and three that actually created jobs but at a huge cost in incentives offered.

For instance, we found that the state’s infamous Michigan Economic Growth Authority created jobs but at an incentive cost of $125,000 per job per year. Our study concluded that Michigan taxpayers offered an average of nearly $600,000 worth of incentives per year for every job created.

These results do not pass the cost-benefit sniff test.

My point in all of this is that state incentive programs fail to deliver, and there is a mountain of evidence to support that assertion. Put more simply, providing special favors to companies is an ineffective, expensive and unfair strategy for creating jobs and growing our economy.

The objective of SB 615 to create better-paying jobs and encourage business leaders to invest and grow is important, especially to recover from economic losses from the pandemic and lockdowns. But instead of handing out special deals to connected companies, lawmakers should focus on improving the overall state business climate, which is a proven strategy to grow our state economy.

Michael LaFaive is the senior director of the Morey Fiscal Policy Initiative at the Mackinac Center for Public Policy.