Using the ALICE reports’ hypothetical household budgets to estimate the financial wellbeing of every household in Michigan is inappropriate for another reason: The estimated costs are based on the needs of atypical households. The latest report generates estimates for just three types of households. A single adult household, a single senior, and a household with two adults, an infant and a preschooler. These estimates are $23,400 for a single-person household, $26,244 for a single senior and $64,116 for the four-person household.[35] But these are atypical households and face different costs than most others. Using these hypothetical budgets as the baseline to estimate the typical financial needs of all households is inappropriate.

A companion document to these reports explaining further details about the ALICE methodology claims these households to be the “three most common household compositions.”[36] But that is not correct. In fact, that same document just a few pages earlier, illustrates this. A chart shows that both two-person and three-person households are more common in the U.S. than are four-person households.[37] And households with two young children, one in preschool and one in day care, is only a subset of the group of four-person households. The ALICE reports, however, make no effort to explain why a family of four with two young children should be the baseline for estimating the needs of every single household in Michigan consisting of more than one person.

In fact, only 5.2% of households in Michigan contained more than one child under six years of age in 2019.[38] Nationwide, only 2.9% of households had two children under the age of six in 2019.[39] The average household size in Michigan is less than 2.5 people.[40] It is an improper comparison to estimate the spending needs for a very specific, atypical group and then assume that those costs must be equally met by all other households. A family with two young children not yet of school age face significantly higher costs than other types of households.

To illustrate the problem with this approach, consider a family of four with school-age children enrolled in public schools. While this household is similar to the one used in the ALICE methodology, it faces significantly different costs because it no longer pays for child care. The ALICE report, though, assumes that this household needs to spend more than $1,100 per month for child care. If it does not earn enough to cover those costs, the methodology determines that this household cannot make ends meet. These estimated costs are even further disconnected and inappropriate to use for households that differ more significantly from the report’s model four-person house.

The ALICE report not only assumes all households with children need to pay for child care; it assumes that all households with more than one person must endure these costs. In other words, it lumps together and estimates the same spending requirements on a two-person household with no children as it does a large family, and everything else in between. The composition of households is more varied and diverse that the ALICE report assumes, and this is a fundamental flaw of the report, inflating the estimated financial pressures faced by most Michigan households.

This is not to say that child care costs ought to be ignored. But consideration needs to be given for the fact that these costs are borne by only a small fraction of the general population and should not be included when estimating the needs of the typical household. Using an atypical family situation and cost pressures as the threshold likely overstates the portion of people the ALICE reports are trying to identify and quantify, because many of those households will face lower costs and can meet their needs without spending as much as the hypothetical household used in these reports. 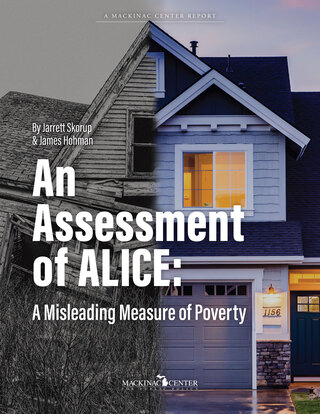