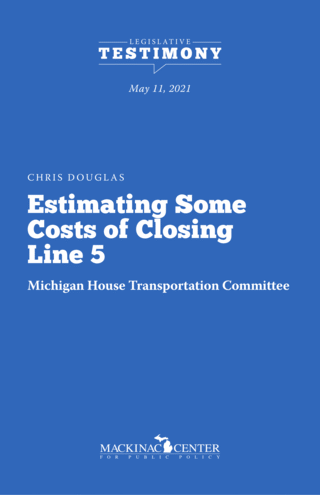 Estimating Some Costs of Closing Line 5

The following is testimony presented to the Michigan House Transportation Committee by Chris Douglas on May 11, 2021.

Closing Line 5 and replacing it with semitrucks to transport liquid fuels will require substantial costs. These costs include damage to roads, traffic congestion, traffic accidents and increased carbon dioxide emissions.

Estimating the cost associated with a semitruck is tricky, and as the Congressional Budget Office notes, even the best available estimates are subject to considerable uncertainty. However, consistent estimates for these costs do exist in the academic literature, which allows us to estimate the costs of adding more semitruck traffic to Michigan roads.

The CBO estimates that an 80,000-pound, five-axle semitruck does approximately 20 cents worth of pavement damage per mile to a rural road.1 This likely underestimates the current damage being done, since this estimate is from the year 2000. It has been adjusted for inflation so that it is expressed in 2021 dollars, but since road construction costs have risen faster than the rate of inflation, this 20 cent/mile estimate still likely understates the costs of the damage a semitruck currently does to roads. The CBO also estimates that trucks driving on a rural road result in 4 cents per mile in congestion costs and 3 cents per mile in accident costs, both of which are in 2021 dollars.

Using these figures allows us to obtain an estimate for the cost of closing the Line 5 pipeline and replacing it with tanker truckers. Line 5 stretches from Superior, Wisc., to Sarnia, Ontario. Approximately 600 miles of this trip takes place on Michigan’s roads. One tanker truck making this trip would thus cause $120 in pavement damage, $24 in congestion costs and $18 in accident costs for a total of $162 each way, or $324 round trip. It is estimated that 2,150 trucks are needed to travel from Superior to Sarnia each day to replace the lost capacity from Line 5. Thus, this truck traffic would result in $696,600 in cost to the state each day. If these roundtrips are made very day, the annual cost would be $254 million.

A semitruck averages 6.5 miles per gallon of diesel.4 Thus, a semitruck will need approximately 92 gallons of diesel fuel to make this trip each way or 184 gallons round trip. These 184 gallons of diesel fuel will emit approximately two tons of carbon dioxide, which does $102 damage to the environment. Twenty-one hundred and fifty trucks making this round-trip each day thus emits 4,300 tons of carbon dioxide each day, or about 1.5 million tons each year. This does $219,300 in daily damage or $80 million in annual damage to the environment through its contribution to global climate change, based on estimates from the Biden administration. Thus, the total cost of replacing Line 5 with taker trucks is $916,000 per day, or $334 million per year due to road damage, congestion, accidents and carbon dioxide emission.

There are other costs to keep in mind. The damage done to the Mackinac Bridge likely exceeds the damage done to a typical road. However, I have not seen estimates for the cost a semitruck imposes on a suspension bridge. Congestion at the tollbooths would be another cost, particularly in the summer driving season. Upwards of 600,000 vehicles will cross the Mackinac Bridge during the peak summer tourist season.5 Adding 2,150 additional trucks per day would result in a 10% increase in traffic during this time, leading to congestion and lengthy delays to cross. Delays during the summer months can already be an hour or more. Estimates regarding the cost of accidents and congestion are just average costs and likely reflect ideal conditions. Congestion costs are likely to be higher in the summer construction season and on the two-lane roads in the Upper Peninsula during the summer driving season. Just putting 2,150 trucks on the road each day will result in more congestion that these averages suggest, as that would be nearly four tanker trucks per mile. Accident costs are likely to be higher in the winter due to the frequent snowstorms in the Upper Peninsula and Northern Lower Peninsula.

Chris Douglas is currently the department chair of the UM-Flint Economics Department, where he has been on faculty since 2007. He earned his B.S. in electrical engineering and his B.S. in economics from Michigan Technological University in 2001, and his Ph.D. in economics from Michigan State University in 2007. Dr. Douglas teaches Principles of Microeconomics, Principles of Macroeconomics, International Economics, Public Finance, and Sports Economics.