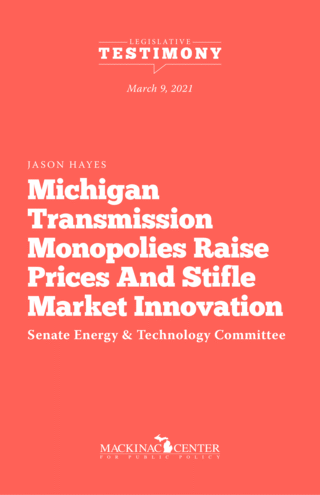 The following is testimony submitted for presentation to the Senate Energy & Technology Committee by the Mackinac Center’s Jason Hayes on March 9, 2021.

I am pleased to offer this testimony on behalf of the Environmental Policy Initiative at the Mackinac Center. The Mackinac Center is a nonprofit research and educational institute that advances the principles of free markets and limited government. Through our research and education programs, we challenge government overreach and advocate for a free-market approach to public policy that allows people to realize their potential and dreams.

The Mackinac Center submits this testimony in opposition to Senate Bill 103. This bill unnecessarily shelters incumbent, monopoly electric transmission companies in the state of Michigan from competition. The bill grants these companies the sole legal right to “construct, own, operate, maintain, and control” transmission lines so long as they are included in the transmission operator’s approved plan and the transmission operator is the designated owner of the line, or if the line will connect to their other facilities.

But doing this harms Michigan’s ratepayers by limiting the competitive pressures that would reduce prices and encourage innovation. It also provides a special type of government-enforced protection for a select few private companies in Michigan, even though those protected companies are quite content to compete with transmission owners in other states where competitive bidding is allowed.

The state of Michigan has experienced the benefits of competition when it comes to providing electricity to ratepayers. That experience demonstrates that when competition is encouraged in generation and distribution markets, Michigan’s ratepayers benefit from lower overall rates. There is no reason to expect any different outcomes in transmission markets.

Until Michigan deregulated generation and distribution in 2000, its electricity rates were consistently higher than both the national average and the average of other Great Lakes states.1 During the period of open competition between electricity suppliers — from 2002 to 2008 — Michigan’s electric rates dropped significantly. 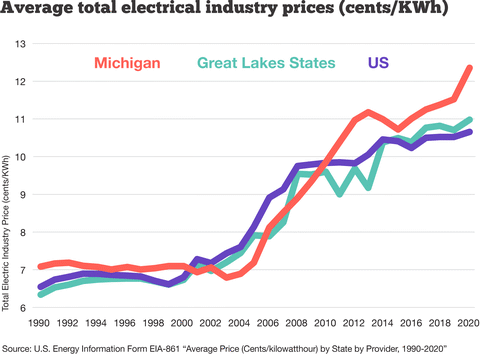 But that argument can only be correctly applied when there is more than one company building separate and competing transmission infrastructure. As the April 2019 Brattle Group report for LSP Transmission Holdings indicated, it is possible to reduce costs and increase efficiencies by having companies compete for the right to construct or maintain portions of the same transmission system.2

The logic behind this already holds in transportation, with construction firms competing for contracts to build highways. And as the Brattle report rightly notes, “Subjecting more transmission investments to competition would stimulate innovation, increase the cost-effectiveness of the investments, and provide greater overall benefits to customers.”

Furthermore, one of the companies that currently enjoys monopoly status in the state of Michigan, ITC Holdings, appears very much open to participating in competitive bidding processes in other states.3 ITC Holding’s parent company, Fortis, Inc., also constructs and operates high voltage transmission projects in Canada, Belize, and the Grand Cayman and Turks and Caicos Islands.4

First, Concentric officials argue that, although many of the 15 competitively bid projects that were reviewed in the Brattle report have cost caps, several have not reported their final costs. Therefore, it is too soon, they say, to make any predictions about final costs. However, the Brattle report recognized this fact in its reporting and cautioned readers to remember that cost increases were still possible.

Brattle also described the typical causes for prices increases, such as a change of approved routes, changes in material costs, and environmental permitting costs. But price increases caused by those factors would fall just as heavily on projects completed by monopoly transmission owners as they would on competitively bid projects. For that reason, Brattle’s initial findings can still represent a good guidepost from which we can reasonably draw careful context.

Concentric also critiques the Brattle findings on both the upper and lower bounds of predicted cost savings by noting that incumbent transmission owners typically see “fairly modest cost changes” of “between -2.9% and 7.0%” of overall project costs. But if this is true, it is not an argument against competitive bidding processes. Rather, it should indicate to Michigan’s legislators that incumbents would be well prepared to submit an effective bid in a competitive process.

Concentric then moved on to argue that transmission solicitations are both time and resource intensive. Concentric hedges by saying “this analysis is not intended to claim or otherwise argue that solicitations for new transmission projects are never worthwhile.” But the implications of this critique are obvious and are stated in a following sentence: “This information should enable policymakers and the public to make more informed decisions about whether to expand these solicitations.” It’s abundantly clear that Concentric advocates against expansion.

Despite the Concentric critique, Brattle’s report effectively answers the question about the ability of other transmission companies to compete effectively and to fully understand the complexities of new market areas. It does so by describing competitive bidding process in the MISO region. In the examples it reviewed, outside bidders produced high-quality proposals that took into account key policies, climate/weather, field and soil conditions, etc. and still came in at 15% below initial regional cost estimates. Brattle also notes that the costs associated with the bidding process are typically recovered, as they are borne by the companies taking part in the competition.

Michigan’s own history with competitive processes is clear. From 2002 to 2008, with competition, Michigan ratepayers enjoyed relatively lower costs without a reduction in service quality. Competition encouraged innovation and price reductions. There is no reason to expect different outcomes from competition in the development and operations of transmission services.

Legislators should not restrict opportunities for competition, which can reduce Michigan’s already too-high electricity rates, as it has in the generation and distribution sectors. This is especially clear, given that ITC and its parent company are unwilling to limit their business activities to a single “natural monopoly” operating area in the state of Michigan, but choose to engage in competitive bidding processes when they see an opportunity to advance their business interests.

Jason Hayes is the director of environmental policyfor the Mackinac Center for Public Policy.