Breaking Down the CARES Act

The U.S. Congress approved three separate COVID relief packages that each included significant outlays for K-12 education. In March 2020, the Coronavirus Aid, Relief and Economic Security Act, or CARES Act, provided an initial jolt of fiscal relief to the nation’s public schools. Federal policymakers gave broad flexibility to school districts on how the relief funds could be used. The U.S. Department of Education also waived the long-standing requirement that states conduct standardized testing to be eligible for federal aid.

As part of the CARES Act, Congress provided the state of Michigan $3.08 billion from the Coronavirus Relief Fund for a variety of expenditures deemed necessary as a result of the COVID-19 public health emergency.[4] The Michigan Legislature provided districts with an extra $256 million from the CRF that amounted to $175 per pupil.[*]

On top of that, Michigan public schools received four streams of supplementary federal funding through the CARES Act, as follows:

From these four sources, Michigan public schools collected a combined $466 million, an average of $322 per student. The amount of CARES-related revenues received varied widely by district, however, as a result of the different formulas used to parcel out funds. Excluding tiny outlying districts, per-pupil allocations ranged from $12 at the Old Mission Peninsula School and Livingston Classical Academy charter schools to $3,180 per student at Flint Community Schools. Adding in the $256 million CRF school aid contribution extra raises the CARES Act supplemental total to $721.6 million.[10]

According to the CARES Act, local districts must use the first three pots of funds described above by September 2022.[11] The $18 million of CRF dollars allocated by the Legislature had to be spent by Dec. 30, 2020.[12] Through November 2020, Michigan agencies reported spending only one-eighth, or $48.8 million, of the nearly $390 million in ESSER funds appropriated for COVID relief, and only $2.2 million of the GEER funding had been spent.[13] Comparable data for the use of CRF dollars are not available. But somewhere between $397 million and $410 million of Michigan’s CARES Act education relief remained unspent more than six months after Congress authorized the money.

Greater detail is available from the $40.3 million in CARES Act funding that districts reported spending through June 30, 2020. Over 60% of these relief funds went to employee salaries and benefits. About one-eighth of the spending went to nonpayroll expenses in elementary-through-high school basic instructional programs. Lesser amounts went for building maintenance (6.7%); technology for distance learning or other instruction (4.8%); food services (3.5%); and information technology systems (2.7%).[14] 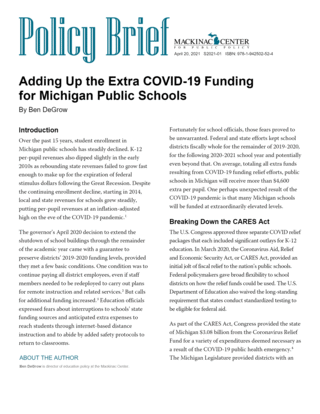