Electricity in Michigan is generated from several different sources. In 2018, coal represented the largest single source, providing more than one third of the state’s total production. Natural gas and nuclear both generate more than a quarter of all energy generated in Michigan. Together, these three sources account for nearly 90% of all the electricity generation in the state.

The map below shows where electricity is generated in Michigan. Most generation happens in the lower part of the Lower Peninsula, somewhat unsurprising as this is where most of the state’s population resides. Most of the state’s coal plants are located near coastlines, which allow access to water for cooling. Both nuclear power plants are also located on coastlines. Natural gas power plants are more evenly distributed, although many are located along major interstate highways, such as I-94 and US-31/I-196 and along existing pipeline routes. Most of the hydroelectric plants are in the northern part of the Lower Peninsula and in the Upper Peninsula, while most of the wind production happens in the state’s Thumb region. 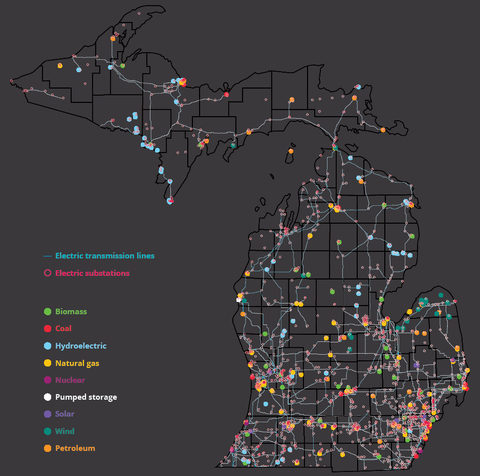 As shown in the table below, while the total amount of generated electricity in Michigan in any given year remains relatively unchanged year to year, the makeup of the resources used to generated that electricity regularly varies. Since 2001, Michigan’s reliance on coal for electricity generation has declined significantly, with natural gas, nuclear and petroleum sources comprising a larger share of the total. Over the period, wind and solar went from barely used to a regular contributor, although they still combined to produce approximately just 5% of all electricity generated in Michigan in 2018.