Expanding access to customized learning opportunities requires taking advantage of the broadest possible range of digital courses. Yet students from low-income households or rural areas may start off behind in their ability to access online content and services, a crucial component of customizing education. Some students need better access to the internet and to competent digital instructors.

Estimates range widely regarding disparities in internet connectivity. The U.S. Department of Education reports that in 2018, 94% of the nation’s children ages 3 to 18 lived in a home with internet access. Excluding households with only mobile phone data, the share falls to 88%. Children from lower-income families were far more likely to have access only through a smartphone. Of those without home internet, 43% said it is a matter of preference while about a third cited cost. Roughly 1 in 400 children can’t use the internet where they live primarily because it’s not available in their area.[*] According to more recent estimates by the U.S. Census Bureau, more than 90% of Michigan households with children in school always or usually have a device and internet available for educational purposes.[9]

That suggests about one in 10 students lack the technology needed for online learning. But those numbers may be too low. A spring 2020 survey conducted by intermediate school district officials found nearly 30% of Michigan students lack the type of internet service or device needed to learn through virtual lessons and online interaction.[10] Not surprisingly, these students are more heavily concentrated in low-income households. The survey did not assess how many families could afford or access the needed technology on their own. Thus, the actual level of student need for internet services likely falls between the two estimates.

Regardless of the precise number, progress has been made in addressing this barrier through a combination of federal funds, state legislation and private philanthropy. In response to the great disruption caused by the COVID-19 pandemic, the U.S. Congress adopted the CARES Act to provide emergency financial relief. Two major buckets of federal CARES Act cash specifically benefited Michigan K-12 schools:

The $60 million in GEER funding is shared among about 60% of the state’s conventional districts and 80% of its charter schools. Schools receive a flat amount of nearly $87 for every student enrolled in 2019 who was low-income, received special education services or was designated an English language learner. Schools can receive funds multiple times on behalf of the same student if they fit more than one of these characteristics.[12]

Through federal funding and other sources, the state’s largest school district has received a lion’s share of these resources to address digital gaps and more. Detroit Public Schools Community District took in nearly $90 million of the combined total of $410 million in CARES Act K-12 funds.[‡] In addition, a group of businesses and nonprofit organizations donated $23 million in portable computers and high-speed internet access to the district’s 50,000 students.[13] Charter and nonpublic students in the city later received a smaller philanthropic contribution.[14]

Additional federal funding has already been designated for Michigan to expand high-speed internet access in underserved regions. A law signed by the governor in October 2020 requires the state to dole out broadband grant funds on a competitive basis to areas of need. It also prohibits the money from going to inefficient government-run operations. This law should help put broadband internet within reach of even more Michigan students.[15]

In the interim, other solutions are available for those in remote areas. There are hundreds of wireless internet hotspots throughout most of the state that can be accessed at no cost.[16] During the initial school building shutdowns in response to the pandemic, at least one West Michigan school district equipped and sent out buses with similar technology to provide mobile internet access points to students.[17] At the beginning of the 2020-21 school year, Jackson Public Schools spent $65,000 to outfit 52 buses with this capability and began deploying them to low-income neighborhoods.[18] If more digital options were made available to more students, more districts might invest in expanding students’ ability to access the internet.

Just as concerning as equal access to digital learning opportunities is the supply of teachers qualified to deliver this instruction. Online education programs range from fully synchronous (live, remote interaction between student and instructor) to fully asynchronous (recorded video or audio lecture content).

Many online programs incorporate elements of both, each of which require different applications of teacher skills. These skills include understanding how to use relevant digital technologies to deliver instruction and to identify areas where students need extra help. The online space often requires different approaches to effectively engage students and motivate them to progress in their learning.[19]

In Michigan, the amount of teacher professional development in online instructional techniques increased dramatically with the onset of the pandemic. The amount of continuing education hours teachers earned from Michigan Virtual between May and September of 2020 well more than doubled the total from all of 2019. It remains to be seen how much that will improve the quality of K-12 virtual programs during the 2020-21 school year, however.

Longer-term commitments to online instruction will necessitate ongoing improvements, through effective training of more teachers, the development of the craft through experience, and the implementation of effective technical supports. A system built on the needs of students and the informed choices of families will strengthen incentives to drive these improvements.

[*] “Children’s Internet Access at Home” (National Center for Education Statistics, May 2020), https://perma.cc/2ZB5-5LG8. Of the 6% who lack internet access, 4% say it is because it is not available in their area.

[‡] Author’s calculations based on data from the Michigan Department of Education. DPSCD received $85.1 million from ESSER and $4.7 million from GEER. 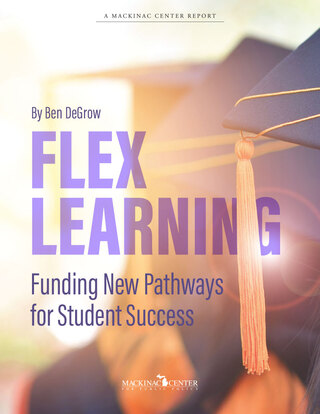