Amendments to Trust Funds if Proposal 1 is Approved

Proposal 1’s amendments to the Michigan Constitution would change the allocation of the revenue from the state’s mineral, oil and gas leases and royalties. It also would alter how money can be spent from these funds.

The most significant change from Proposal 1 is that it would eliminate the monetary cap on the Natural Resource Trust Fund. In other words, revenues from the state’s mineral and oil and gas leases and royalties would be dedicated to natural resource management in perpetuity, instead of ceasing when the $1.3 billion combined limit on the funds is reached.[12]

Under current policy, once the State Parks Endowment Fund reaches $800 million, proceeds from leases and royalties could be appropriated by the Michigan Legislature as they see fit. They would not be bound by a requirement to use the funds for the protection or management of natural resources or for building up endowment funds dedicated to those purposes. Legislators could use the funds for other expenses — public education, roads, health care or whatever purpose they agree upon.

The amendment, however, binds this revenue stream from state-owned resources to the NRTF after the SPEF’s cap of $800 million is reached.

There are other changes. Currently, the NRTF is restricted from spending more than 25% of its annual spending on capital improvements and the development of state lands. Proposal 1 would make this spending a higher priority and mandate that at least 25% of the NRTF’s allocation go toward development projects.

Proposal 1 would also explicitly allow “renovation and redevelopment” — not just simply “development” — as acceptable uses of NRTF funds. Renovation and redevelopment may already be current practice, however. A project approved in 2019 allowed the renovation of the Pigeon River Country Discovery Center building in Otsego County, for example.[13] Proposal 1 would make clear that repairs, upgrades and expansions of existing facilities are explicitly allowed activities.

The SPEF is allowed to spend its proceeds on capital improvements and development of state parks. Similar to the change to NRTF, Proposal 1 would require the SPEF to devote a minimum of 20% of its annual spending to capital improvements and development. Proponents of the amendment point to this as a key issue, noting that this level of spending has only occurred once since fiscal year 2012.[14] Proposal 1 would also allow “fund administration” as an allowable use.

The table below summarizes the changes made to the trust funds, with the alterations bolded. 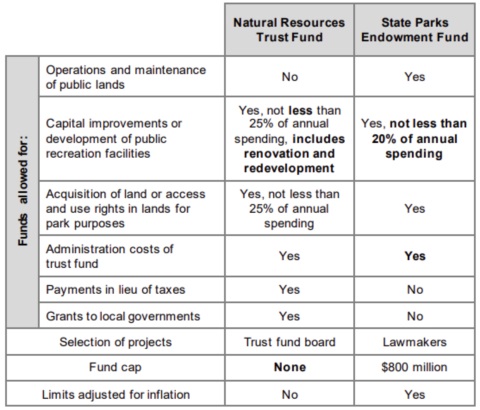 The current fund balance of the NRTF is not adjusted for inflation, so its investments will be worth less over time. The SPEF’s fund balance, on the other hand, is adjusted for inflation when it reaches its $800 million limit. By eliminating the cap on the NRTF, Proposal 1 would effectively eliminate this disparity, because the NRTF would be allowed to grow in perpetuity from incoming lease and royalty revenue.

It will likely be years before these proceeds begin to add to the NRTF balance. Annual revenue from leases and royalties is volatile and has ranged from $24.7 million to $224.5 million from fiscal year 2004 to fiscal year 2019.[14] Under the existing language and unchanged by Proposal 1, half of this revenue can be used to build the SPEF’s fund balance and up to half can be used for current spending on authorized uses from the fund.[15]

According to the state’s annual financial report, the SPEF has a $283 million balance. Lease and royalty revenue have been weak in the recent past, and this balance would not exceed $800 million for the foreseeable future, if revenues remain at the $25 million to $30 million level received over the past five years.[16] Oil and gas price volatility and other legislative considerations can affect how much gets allocated to the fund balance and may expedite or delay the time it might take for lease and royalty revenues to start accumulating in the NRTF, if Proposal 1 is approved.

[12] There is an exception that royalties on lands purchased by the Game and Fish Protection Account of the Michigan Conservation and Recreation Legacy Fund stay within that fund. “State of Michigan: Comprehensive Annual Financial Report” (State of Michigan, Mar. 6, 2020), 191, https://perma.cc/7X73-J4JS. 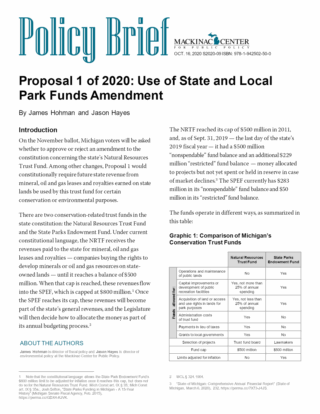