Michigan is the largest consumer of residential propane in the United States, with Minnesota and Wisconsin second and third, respectively.[1] The state’s Upper Peninsula, or the U.P., alone uses approximately 34.2 million gallons of propane per year, with about 78% of that going toward residential heating. Approximately 23,000 households in Michigan’s Upper Peninsula use propane to heat their homes.

The primary source of this fuel is a fractionator located in Rapid River, Mich. This device distills oil into separate products such as propane and is connected to the Line 5 pipeline that travels through both Michigan peninsulas and crosses the Straits of Mackinac. The Rapid River fractionator produces 87.6% of the propane used by residential, commercial and industrial customers throughout the Upper Peninsula.[2]

Gov. Gretchen Whitmer requested that the Michigan Public Service Commission assess whether Michigan’s energy infrastructure was capable of meeting the state’s needs in the face of changing weather and energy demand. This request followed the January 2019 Polar Vortex emergency, when during a period of extreme cold, an explosion at a major natural gas supply source forced one of the state’s large monopoly utilities to take the facility offline.

MPSC published the Michigan Statewide Energy Assessment in July 2019. One of the report’s recommendations urged the development of a “formal contingency plan” to ensure “the continued supply and delivery of propane, or other energy alternatives, for Michigan residents” in the event of a temporary or permanent disruption of the Line 5 pipeline, a primary source of both light crude oil and natural gas liquids in the region.[3]

The principal reason residents might experience a disruption of the Line 5 pipeline is an ongoing effort on the part of Michigan’s attorney general and governor to permanently decommission Line 5. As part of that effort, Attorney General Dana Nessel and Gov. Whitmer have also both committed to stopping the Line 5 Straits of Mackinac tunnel agreement, which was approved in December 2018. This agreement allows Enbridge Energy, which owns and operates the pipeline, to construct a new, cement-lined tunnel, 100 feet below the bed of the Great Lakes and relocate the pipeline into that tunnel.[4]

It is important to emphasize that the feared disruption in heating and transportation fuels is not an unavoidable caprice on the part of markets, nature or geography; it is entirely due to a deliberate policy choice on the part of the state government. 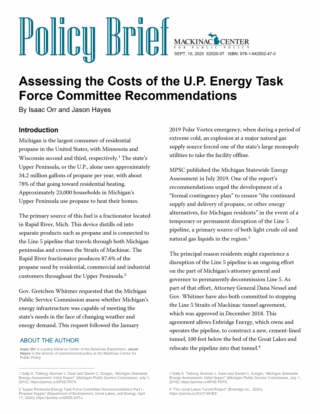