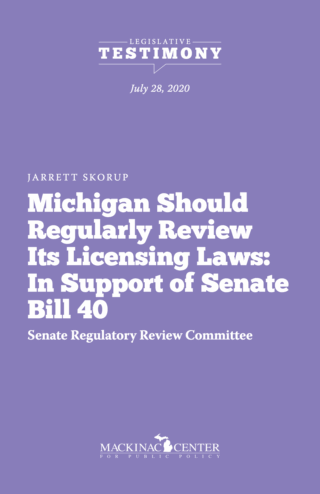 Michigan Should Regularly Review Its Licensing Laws: In Support of Senate Bill 40

The following is testimony submitted for presentation to the Senate Regulatory Review Committee by the Mackinac Center’s Jarrett Skorup on July 28, 2020.

Pop quiz: Who needs more training hours in Michigan — barbers or airline pilots? The state of Michigan requires 1,800 hours for barbers while the FCC requires 1,500 for pilots. Amateur pilots are far less.

How about make-up artists or auto mechanics? Make-up artists are mandated to do 20 times the amount of training as mechanics. Keep in mind — people do training outside of what the state requires.

Michigan licenses about 200 occupations. Many are necessary, but many others should probably be repealed or regulated in other ways. What Senate Bill 40 does is sets up a regular process where the state is at least evaluating what the requirements are for getting a license in the state.

Perhaps our state doesn’t need to be among the very few who license potato dealers, animal control officers, court reporter or butter grader. A review would evaluate our current inconsistent requirements — like where Michigan mandates licenses for painting and decorating, but not drywall hanging. Installing wood floors and tile, but not carpeting and vinyl. Putting up gutters, but not fences. Laying concrete, but not asphalt paving. House wrecking, but not house moving.

This would not be something new. Gov. Snyder tasked the Office of Regulatory Reinvention of doing a review of many of our licensing laws, which they did in 2012 and led to reforms. Other states, like Arizona, Tennessee, Nebraska and more, regularly review their licensing laws. Both President Obama and President Trump have signaled interest in this area — Obama’s Council of Economic Advisers and Trump’s Department of Labor both issued reports calling for occupational licensing reviews and reforms.

Licensing laws apply to about 20% of Michigan’s workers. When they are focused on public health and safety and measuring the trade-offs of the restrictions, they can be effective. But these laws block people from the workforce — often with too many testing requirements, costly fees or arbitrarily preventing people with criminal backgrounds from rehabilitating themselves through work. Senate Bill 40 would simply mean the state is regularly reviewing these rules.

Jarrett Skorup is the director of marketing and communications at the Mackinac Center for Public Policy. In this role, he is in charge of marketing efforts, media strategy and overseeing policy campaigns and objectives.