Virtual Event: "Crisis and Leviathan" in Light of the COVID-19 Crisis

In his classic book, "Crisis and Leviathan," economist and historian Robert Higgs shows "how Big Government emerged from responses to national emergencies" which came about as the attitudes of citizens changed. Major world events like The Great War, Great Depression, World War II and the Cold War kept on coming, leading to "a host of new federal programs, activities, and functions that left legacies — including greater acceptance of bigger government — that endured long after each crisis passed."

We will open with remarks from Mackinac Center President Joseph G. Lehman, followed by Dr. Robert Whaples who will discuss the work of Higgs and how it relates to the current crisis. We've already seen massive added debt, expanded social programs and a huge increase in state control of the economy — from shutdowns to talks of government takeovers of private companies. While controversial in the short-term, there is also the question of whether this is a temporary growth in the size and scope of government or something more enduring. 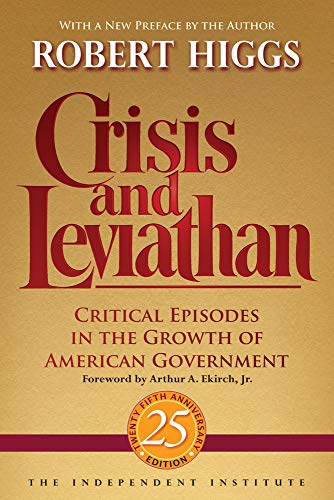 As part of this event, we will be giving away five free copies of "Crisis and Leviathan." We will choose five names at random from among all attendees who are on the call at the close of the event. Thank you again, and we hope to see your RSVP soon.

Robert Whaples is a professor of economics at Wake Forest University and the co-editor of The Independent Review. He is the editor of eight books, including In All Fairness: Liberty, Equality, and the Quest for Human Dignity, and the author of a multitude of public policy papers and articles. Whaples earned his B.A. degree from the University of Maryland and his Ph.D. from the University of Pennsylvania. He is the coach of the Wake Forest Quiz Bowl team. He and his wife, Regina, have five adult children and two grandchildren and live in North Carolina.

Joseph G. Lehman An engineer by training, Joe joined the Mackinac Center in 1995 and was named president in 2008. During his tenure Michigan has seen numerous free-market policy advances in education, labor and state fiscal affairs. Frequently published in national and state media, Lehman also has trained more than 600 public policy executives internationally on strategic leadership and communications. He and his wife are founders of Midland County Habitat for Humanity.