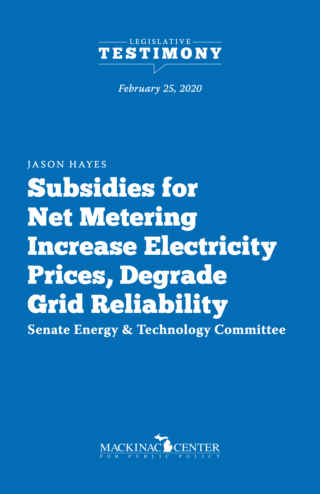 The following is testimony presented to the Senate Energy & Technology Committee by the Mackinac Center’s Director of Environmental Policy Jason Hayes on February 25, 2020.

I am pleased to offer this testimony on behalf of the Environmental Policy Initiative at the Mackinac Center. The Mackinac Center is a nonprofit research and educational institute that advances the principles of free markets and limited government. Through our research and education programs, we challenge government overreach and advocate for a free-market approach to public policy that allows people to realize their potential and dreams.

We are submitting this testimony in opposition to Senate bills 596-598. This group of bills seeks to alter the net metering programs, tariffs, and caps currently governing distributed generation programs in the state of Michigan.

We appreciate the bills’ attempt to chip away at the firm grasp that regulated monopoly utilities have over electricity generation in Michigan. However, we strongly oppose state policies that put government in the position of choosing winners and losers in electricity generation markets. Therefore, legislation that provides even more targeted benefits to an already heavily subsidized and government-mandated generation source cannot be considered a workable, or free-market means of expanding diversity in electricity markets. These bills simply layer one nonmarket policy option over top of another, and will result in higher electricity prices, reduced choice, and a less resilient electrical grid.

SB 596 states, “An electric utility or alternative electric supplier shall not restrict the number of participants in the distributed generation program.” It further specifies that “The distributed generation program shall include net metering. An electric utility or alternative electric supplier shall make net metering available to any customer that submits an application.” Lastly, the bill doubles the length of the previous net metering program to “a period of not less than 20 years.” In the bill, net metering is defined as “the full retail rate to the net of the bidirectional flow of kilowatt hours across the customer interconnection with the utility.”

SB 597 removes the existing 1% cap on the total number of net metering customers and makes it mandatory for utilities to enroll any customer who “meet[s] the interconnection and equipment requirements for participation” in the distributed generation/net metering program.

This package of three bills will force regulated utilities, and the Michigan residents who have no other option for their electricity supply, to accept an unlimited number of distributed generation/net metering participants. The package will force utilities to pay participants in the distributed generation program above-market (or full retail) rates for net energy production from the generation sources on their property, and do so for at least 20 years. As a result, customers who do not receive net metering payments will be subsidizing those who do. Although they receive no benefits, their monthly utility bills will provide the grid infrastructure and help pay to install residential solar panels, so solar-owning residents can enjoy lower monthly electricity costs.

As we have written in previous Mackinac Center publications,

“A utility pays too much when it is forced to pay retail prices for the excess electricity generated by people with solar panels. In the normal course of business, utilities incur infrastructure and overhead costs, which they pass on to their customers as part of the normal monthly utility bill. But when solar panel owners are paid retail rates for the electricity their panels produce, they don’t contribute to meeting those infrastructure costs. In fact, they add to them, and the majority of utility customers who don’t have solar panels must make up the difference.”1

This legislation also ignores warnings in the 2017 U.S. Department of Energy’s Staff Report on Electricity Markets and Reliability, which observed that, “after simulating many combinations and portfolios” in the PJM Regional Transmission Organization, “A marked decrease in operational reliability was observed for portfolios with significantly increased amounts of wind and solar capacity.”

The DOE report also quotes research completed by the North American Electric Reliability Corporation on the capacity value of photovoltaic solar. The report notes that “The on-peak hourly capacity factor of VRE (variable renewable energy) changes as a function of VRE penetration.” This research shows that, as PV solar penetration in the ERCOT region goes above 5%, the net on-peak capacity factor for additional solar drops to near zero. Calls to increasingly expand solar in the Michigan market will make the state’s electric system less stable, and utilities will begin throwing good money after bad, as on-peak capacity factors for this new solar generation decrease in proportion to their market penetration levels.

Michigan’s Legislature needs to ensure that state residents who are forced to endure regulated electricity markets can still enjoy the benefits of low-cost, reliable energy. But paying above-market prices to residential solar owners provides a substantial benefit to a tiny minority of utility customers at the expense of all the other customers. Furthermore, the customers that benefit from these subsidies tend to be those who can already afford the costs of purchasing or leasing solar panels. Meanwhile, those who are forced to cover the added infrastructure costs are often already struggling to afford their monthly utility bill.

As free-market supporters, we agree that Michigan residents should be free to purchase and operate distributed generation sources to achieve their personal energy or environmental goals. But we argue strongly against the notion that they deserve special favors, subsidies, or above-market rates as a means of encouraging them to do so.