Michigan law defines a barber as “a person who shaves or trims the beard of a person; cuts, trims, shampoos, relaxes, curls, permanently waves, dresses, tints, bleaches, colors, arranges, or styles the hair of a person; massages the face and head of a person; or renders personal services of a similar nature customarily done by a barber.”[54]

According to state licensing agency reports, there are about 800 to 900 barber licensing applications received each year with about 700 being accepted annually.[55] This data has only been tracked in recent years, so it is unknown how much this has changed over time.

All 50 states and the District of Columbia license barbers with the state of Alabama becoming the final state to become licensed in 2013.[56] It is one of the oldest licensed professions in the nation, with Minnesota becoming the first states to pass this occupational regulation in 1897.[57]

Michigan mandates 1,800 hours of training at a school costing up to $13,000 annually, the passing of an exam, continuing education requirements and hundreds of dollars in fees and testing costs.[58]

The total regulatory burden for Michigan barbers is ranked as the 11th highest in the nation. The total number of hours to meet the licensing requirement is higher than other states in the Midwest, such as Illinois, Indiana and Wisconsin. And the mandates are far more than in New York, which requires only about 10% of the training required by Michigan.[59]

In the most recent fiscal year, there were 83 total complaints made in Michigan against barbers, and the state opened 49 investigations and took some type of enforcement action 29 times.[60] In other words, of the 1,000 or so barbers estimated by the BLS to be working in Michigan, about 8% had a complaint filed against them in 2018. Based on state reports, nearly all the disciplinary actions taken in 2019, about a dozen, were related to barbers operating without a license or aiding others who were unlicensed.[61]

The most similar occupation to a barber is a cosmetology worker, who can provide most of the same services as barbers and more. Besides hair care services, cosmetologists can also provide skin care, manicuring and electrology.[62] But cosmetologists in Michigan pay 17% less in fees and exam costs and need 300 fewer hours of mandated education and training.[63]

There is a wide variety of liability insurance options for barbers. Since barbers are licensed in all 50 states, any comparison of rates cannot be easily made. However, the rules and regulations differ significantly across state lines — barbers in Nevada, for example, are required to have five times the amount of training prior to licensure than those in New York.[64] According to the leading online insurance marketplace, insurance costs for barber shops, spas and salons are based on business experience, a claims history and the size of the company. There is no mention of whether state occupational licensing rules impacts the risk involved in insuring a barber. 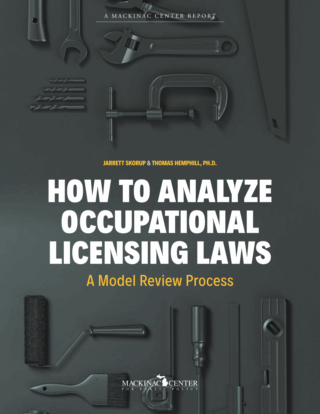