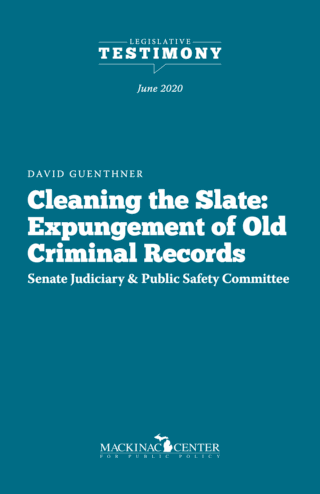 The following is testimony presented to the Senate Judiciary & Public Safety Committee by the Mackinac Center’s Senior Strategist for State Affairs David Guenthner in June 2020.

Good morning. My name is David Guenthner and I am the senior strategist for state affairs at the Mackinac Center for Public Policy. We are a 501(c)(3) nonprofit research and educational institute that advances the principles of free markets and limited government. Through our programs, we challenge government overreach and advance free-market approaches to public policy that free people to realize their potential and their dreams.

People who have committed crimes deserve to be punished in a manner appropriate to the harm they have caused. But once they have completed their sentences and shown over time that they have committed to a law-abiding path, how long should they have to carry around the mark of that moment of poor judgment?

Research has shown that one of the most effective ways to ensure ex-offenders don’t commit additional crimes is to get them into a real job … and quickly. But too many Michiganders are deprived of job opportunities and suitable housing due to decades-old criminal convictions, many for minor offenses. How does it strengthen our economy, our neighborhoods, or our families when people seeking to improve their lives are being disqualified over 10-years-past minor-in-possessions, over 20-years-past DUIs, or over 30-years-past financial crimes?

One tool that states across the country have used successfully to minimize the misuse of criminal history is fair-chance hiring for public sector jobs. We are grateful that Gov. Gretchen Whitmer has continued the “outside the box” executive directive issued by former Gov. Rick Snyder, and we recommend that this Legislature codify it into state law.

Some states have also acted to limit the discretion of state licensing agencies to deny applicants based on criminal convictions that have nothing to do with an occupation’s duties. Unfortunately, the Michigan Legislature still has much work to do on this front. We appreciate the recent approval of this bill package by the House Regulatory Reform Committee and hope you will encourage the full House to send it over for your approval as well.

The next wave of needed reform is to make it easier for people who demonstrate over time that they have turned away from criminal behavior to get their old criminal convictions set aside or expunged.

Most states have processes where ex-offenders can apply for an expungement of certain convictions after a set amount of time has passed since the end of all components of their sentence. In the last year, Pennsylvania, Utah and California have passed laws to make these expungements automatic under certain circumstances.

I recommend to you professor Sonja Starr’s study on Michigan’s current expungement process. Those who receive expungements have substantially higher rates of employment and incomes, and markedly lower crime rates than even the Michigan general adult population — but very few Michiganders take advantage of that process. This data argues decisively that Michigan’s public safety and economy would be improved if more ex-offenders were to get their old criminal records expunged.

At the same time, it is important to acknowledge that making expungement more widely available by creating an automatic process for removing certain offenses from a person’s criminal record is a big shift in our state’s approach to criminal justice. To obtain public support for this shift, the Michigan Legislature — and this committee in particular — must act with discernment.

The House committee discussion and the testimony you will hear make clear that the bills you have pending cannot be the final, forever-and-ever say on Michigan expungement policy. But these bills are a sensible second step toward that destination.

While there may be a number of offenses that belong on a different side of the misdemeanor/felony boundary, most of them are sorted correctly. We should think of misdemeanors as the crimes we’re mad about and felonies as the crimes we’re afraid of. This package’s framework of prioritizing misdemeanors for earlier expungement applications, as well as initially limiting automatic expungements to misdemeanors and nonassaultive felonies, is easily defensible and represents significant improvement on current law.

Many of you are aware that prior before I arrived in Michigan last summer, I had spent 11-1/2 years with the Mackinac Center’s Texas counterpart, the Texas Public Policy Foundation. I was on the ground floor of both the trend-setting 2007 criminal justice reform package and the subsequent development of the Right On Crime initiative that has promoted similar reforms in 37 states (including Michigan) and garnered international attention.

Our first foray into this policy area was the “second chances” bill in 2015. It took a lot of persuasion to get legislators to be willing to step out at all on sealing old criminal records, but by focusing on first-time, nonviolent misdemeanors, we eventually got a strong bipartisan vote in the Texas Legislature and a gubernatorial signature. The next session, lower-level DUI offenses were added to the framework, also on a strong bipartisan vote. Other states have been able to make progress on expungement by learning from Texas’ experience: Start with relatively modest changes, show the early success, obtain public support, and then incrementally expand the offenses that are included.

Going too far, too fast on an issue like this can create unintended consequences that could cause public sentiment on criminal justice reform to swing the other way. It would erode the progress that we have made together over the last several years across criminal justice policy — and not merely on expungement.

As this committee considers amendments, its priority should be to create a consensus that will resolve those issues. When it comes to which offenses to automatically expunge, some should be added to the list, but in the next package of expungement legislation rather than this one.

In conclusion, the expungement bills before you offer ex-offenders in Michigan hope that their old crimes won’t haunt them forever. As such, they give those individuals a clear incentive to model upstanding behavior.

David Guenthner is senior strategist for state affairs at the Mackinac Center for Public Policy.