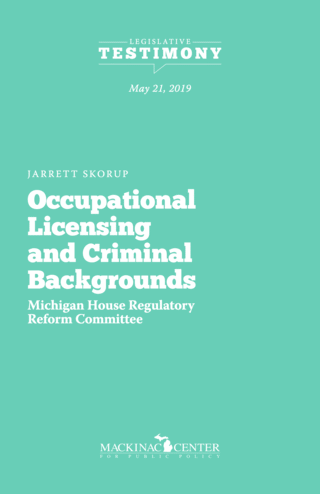 The following is testimony presented to the Michigan House Regulatory Reform Committee by the Mackinac Center’s Jarrett Skorup on May 1, 2019.

Michigan has more than 500,000 adults with a criminal record. About 50,000 citizens are convicted of felonies every year and about that many return to society each year.

The research is clear: The number one way to prevent a person from returning to prison is for them to find work. A consistent job cuts the recidivism rate down substantially — and leads to higher incomes, more taxes being paid, higher marriage rates, fewer kids out of wedlock and many, many other benefits.

A recent study from Peter Blair of Harvard and Bobby Chung of Clemson found that state licensing leads to 17% to 27% fewer works, mostly because of the restrictions on exoffenders.

In Michigan, the state requires an occupational license for about 200 careers. For some licenses, this is an outright ban on anyone with a felony record — teachers, prison workers, nurses, doctors, lawyers and more. For most of the rest, the licensing department and board can use their power to restrict people with any criminal record — even misdemeanors — from being allowed to work through “good moral character” provisions.

This bill package reverses that by saying the state will only deny state permission to work if the criminal background is directly related to the industry someone wants to work in, giving people the ability to know if their criminal background will prevent them from working and providing a path to appealing that decision.

The fears about these bills are overblown. There are dozens of jobs people can work right now with no licensing or background check requirement — babysitters, pet watchers, drywall installation, house sitters, plaster repair, carpeting, flooring and more. The idea that someone is going to go through the requirements for a state license in order to hurt someone, while possible, is unlikely considering they already have the opportunity to do so through many other means.

Nobody should be forced to hire someone with a criminal record if they don’t want to. But, especially at a time when businesses claim they can’t find enough qualified workers, the state should not unnecessarily stand in people’s way of finding gainful employment.

Jarrett Skorup is the director of marketing and communications at the Mackinac Center for Public Policy. In this role, he is in charge of marketing efforts, media strategy, and overseeing policy campaigns and objectives.