Unionized employees should have the power to choose on a regular basis which union, if any, should be granted the privilege of representing them. Workers benefit when unions compete. Giving workers the ability to elect a new union will create incentives for unions to provide better representation for workers. Giving public employees the right to re-elect their union would make unions more accountable and more responsive to their members’ concerns.

Michigan’s government unions should be democratically accountable. Workers should be able to vote for their union just like they vote for presidents, governors, legislators and other elected officials.

A union card should not be an heirloom. Employees should have a say in which union represents them, not simply inherit one.

According to a recent survey, the vast majority of Michigan voters and union households agree: Workers should have the right to reelect their union every two years. 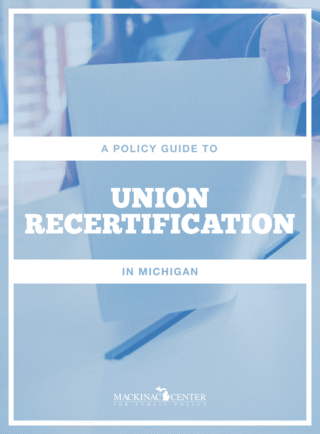