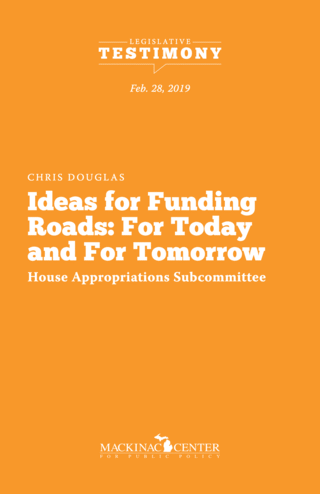 Ideas for Funding Roads: For Today and For Tomorrow

The following is testimony presented to the House Appropriations Subcommittee by Chris Douglas on February 28, 2019.

Thank you for the opportunity to speak before your subcommittee today. My name is Chris Douglas. I am an associate professor of economics at the University of Michigan-Flint and serve as the Chair of the Economics Department. I also serve on the Board of Scholars for the Mackinac Center for Public Policy.

Last fall, I completed a research study titled “Roads in Michigan: Quality, Funding, and Recommendations” that was published by the Mackinac Center. Today, I’d like to share with you some of my findings and give some recommendations on how road funding can be improved.

The condition of Michigan’s roads depends on the type of road. The state of the trunklines, roads with an “I,” “US,” or “M” designation, is relatively good. Seventy-five percent of the lane miles on these roads are rated as being in “fair” or better condition. The concern with these roads is that their condition is deteriorating over time. MDOT projects that the pavement condition of these roads peaked in 2008 and that by 2024, only one-third of their lane miles will be in “fair” or better condition. This is a concern since these roads carry 55 percent of passenger car traffic and 75 percent of commercial truck traffic. These roads are vital for Michigan’s economy.

The immediate problem is at the county and local level. Nearly half of these roads are rated as being in “poor” condition with the condition worsening over time. If action isn’t taken, Michigan’s trunkline roads will look like our county and local roads in about six years.

User fees should be utilized for road funding, as they link usage of the road to payment for it. One option for additional road funding is to increase the gas and diesel tax. Fuel taxes brought in roughly $1.4 billion in revenue to the Michigan Transportation Fund in 2018. Doubling the gas tax would roughly double this revenue, as drivers are largely not able to reduce their fuel consumption in response to higher prices, at least not in the short-run. Tripling the fuel tax, as a recent proposal from former lawmakers advocates, would result in an additional $2.8 billion in additional road revenue.

There are a couple of problems with increasing the fuel tax. One is that it is potentially a short-term solution. In the longer-term, drivers can respond to higher fuel prices by doing things such as buying more fuel-efficient cars, carpooling and moving closer to work, which results in fewer miles being driven and thus offsets the increase in the fuel tax revenue.

Furthermore, the price of crude oil plays a significant role in determining how far road dollars go, given that crude oil is a main input to asphalt. Given that crude oil prices sharply increased during the 2000s while fuel tax revenue was falling in inflation-adjusted terms, road dollars were only going about 25 percent as far in 2010 as they were in 2000. Thus fuel taxes are sensitive to rising fuel prices resulting in drivers driving fewer miles in the long-run while simultaneously increasing the cost of road projects.

Borrowing often becomes the path of least resistance for funding shortfalls, especially at the federal level. However, borrowing is appropriate for large, one-time projects so that the costs can be dispersed over a number of years. Borrowing is not appropriate for things that require yearly expenditures, such as road maintenance.

It is possible that the feasibility of using the gas tax to fund roads is limited due to high mileage, alternative-fuel vehicles becoming widespread. Thus, an alternative funding mechanism may need to be considered over the long term. One option is to toll the interstate highways using automated tolling plazas. However, this would require changing a federal law that prohibits tolls from being levied on nontolled interstate highways. Another option is a Vehicle Miles Traveled Tax, which is being piloted by the state of Oregon. The driver plugs a device into his or her car that records the number of miles traveled in the state and securely transmits this to a private vendor. The driver is then billed at a rate of 1.7 cents per mile, or whatever price the state chooses. Such a system does not require tolling plazas, which saves on overhead and results in more funds going to the roads. If such a system is successful, it could replace the gas tax. Michigan should consider piloting a Vehicle Miles Traveled Tax.

My study has several recommendations where additional road funding can be found in the current budget through spending reprioritization and changing parts of Act 51. Vehicle weight is responsible for road damage. For instance, passenger cars do essentially no pavement damage to the roads. Commercial trucks are responsible for almost all of the damage. However, the amount trucks pay to use the roads, in the form of the registration fee and diesel tax, is far less than the damage they do to the roads. Commercial trucks pay an average of $0.10 per mile to use the roads, but cause about $0.60 per mile in damage. In contrast, passenger cars pay about $0.03 per mile while doing essentially no damage. Thus, the fee paid by commercial trucks should be increased so that it is in line with the damage done.

Compounding this problem is that a number of commercial trucks enjoy a significant discount on their vehicle registration fees. Trucks used as moving vans or to operate a carnival get a special registration fee equal to 80 percent of the usual rate. Trucks that carry farm commodities, milk and logs also get a reduced registration rate. The registration fee paid by these trucks can be lower than what is paid by a passenger car. For example, in 2012, a logging truck paid an average registration fee of $107.30, while a passenger car paid $120. These discounts cost the Michigan Transportation Fund at least $40 million per year. There is no economic justification for these discounts, particularly because trucks cause the most damage to Michigan’s roads. These special discounts should be eliminated.

If the gas tax is a user fee for the roads, then the sales tax from selling gasoline should be as well. This would increase revenue to the Michigan Transportation Fund by about $800 million per year, though this would, of course, come at the expense of the School Aid Fund.

Also, Act 51 distributes Michigan Transportation Fund dollars to cities with populations over 25,000 based, in part, on the number of trunkline miles these cities have. The issue is that these cities are not responsible for maintaining trunkline roads. MDOT is. Act 51 should not pay cities for roads they are not responsible for maintaining. These dollars would be more appropriately utilized in the State Trunkline Fund. Rewriting Act 51 to do this would raise an additional $61.5 million for the trunklines.

The Legislature should consider rewriting Act 51 to eliminate the Transportation Economic Development Fund, which uses gas tax and vehicle registration fee revenue for economic development. The state already has agencies, such as the Michigan Economic Development Corporation and the Michigan Strategic Fund, that are focused on economic development. Worthy projects can seek funding there. Additionally, commercial trucks are already heavily subsidized through the current road funding system. Businesses do not need another subsidy through the Transportation Economic Development Fund. Eliminating this fund would increase road funding by $41 million per year. Implementing these recommendations would increase road funding by about $1 billion and, in my view, represent sound public policy.

Economic development spending diverts resources away from the roads, which comes at an economic cost. The state has approximately $9.3 billion in future MEGA tax credit liabilities. The Michigan Economic Development Corporation has a $250 million annual budget. Economic development packages that give refundable tax credits and allow corporations to keep the income tax revenue generated by their employees reduce the resources available to fix the roads, as do explicit state subsidies to things such as Little Caesars Arena in Detroit. The economic benefit of this economic development spending needs to be weighed carefully against the economic benefit these dollars would generate if they were utilized for repairing the roads.

Chris Douglas is currently the department chair of the UM-Flint Economics Department, where he has been on faculty since 2007. He earned his B.S. in electrical engineering and his B.S. in economics from Michigan Technological University in 2001, and his Ph.D. in economics from Michigan State University in 2007. Dr. Douglas teaches Principles of Microeconomics, Principles of Macroeconomics, International Economics, Public Finance, and Sports Economics.