Federal agencies routinely issue guidance memoranda to states regarding agencies’ interpretation of federal rules or laws. Agency guidance is not legally binding on states but is considered persuasive when disputes over the underlying subject matter give rise to litigation. Federal courts show great deference to agencies’ own interpretations of authorizing statutes and rulemaking.[12] The HHS secretary could issue guidance clarifying that union dues skimming from TANF and CCDF funds violates federal law and that states continuing the practice will be subject to penalties.

Specifically, such guidance could clarify that dues skimming is a misuse of TANF grant funds under existing regulations because it is not “reasonably calculated to accomplish the purposes of TANF” as required by 45 C.F.R. § 263.11 and explained by 45 C.F.R. § 260.20. Guidance should further note that 42 U.S.C. § 604 prohibits the use of TANF funds in a manner inconsistent with the purposes of TANF and that the agency finds dues skimming to be inconsistent with statute as well as regulation. The secretary could further warn that states continuing to misuse TANF funds by skimming union dues from child care providers’ payments will be subject to withholding penalties as authorized in statute.

To immediately halt dues skimming of CCDF funds, the secretary could issue additional guidance clarifying that paying a portion of CCDF funds to unions is impermissible, citing the controlling statute’s plain language: “Amounts received by a State under this section shall only be used to provide child care assistance.”[13] As discussed above, current rulemaking explicitly prohibits several specific types of expenditures using CCDF funds, but all are reasonably related to the grant’s purpose of providing child care. The secretary’s guidance could point out that payment of union dues was omitted from current regulations’ list of prohibited expenditures because it is completely unrelated to the grant’s purpose and previously unforeseeable by federal regulators. 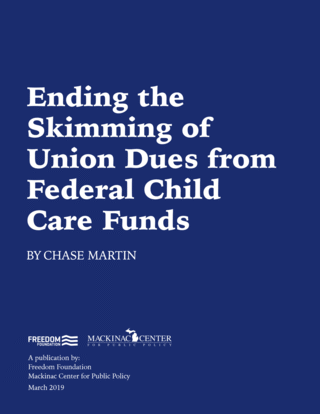