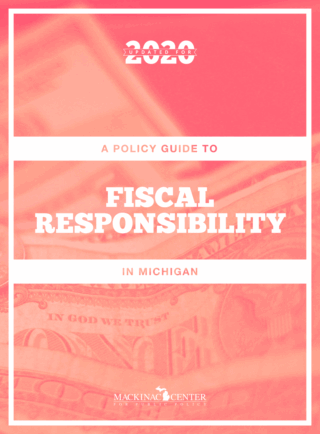 The state of Michigan operates a variety of select business subsidy programs that intend to create jobs and economic growth. Research shows, however, that most such corporate welfare programs are ineffective. And they come at a cost: the next best alternatives for that money — fixing roads or cutting taxes, for instance — are far more likely to create jobs and generate a positive return on investment for taxpayers. This in addition to the fact that it’s just plain unfair to take money from everyone and hand it out to a favored few through the force of government.

Michigan has a history of corporate welfare failure. The state offered $14 billion to select companies through its Michigan Economic Growth Authority tax credit program between 1995 and 2011. Four of five scholarly studies of the program found it had no effect or even a negative effect. Even though the program was shuttered, the state is still paying out more than $750 million in 2017-18 for tax credits promised through MEGA.

From 2008 to 2015, the state dished out $500 million for film incentives, but could show no new growth in film jobs for it. An empirical analysis of the state’s Michigan Business Development Program found that the $157 million in subsidies and loans disbursed from 2012 to 2016 was associated with a decline in jobs. Also, by the authors’ count, as many as one-third of the companies approved for support by the program had been or were in some sort of default or had been dismissed.

Even if all of the spending done by the state in the name of economic development was as effective as the state claims, it would not make much of a dent in the state’s vast economy. Data from the U.S. Bureau of Labor Statistics showed, for example, that in the third quarter of 2017 Michigan’s economy created 196,700 jobs. During that same time frame another 221,400 jobs were lost. During that quarter, the state announced that its Michigan Business Development Program may someday create 3,700 jobs at 23 of its state subsidized projects, only a tiny fraction of all the jobs created without any specialized treatment.

In contrast to state bureaucrats trying to pick economic winners and losers, cutting taxes across the board could really spur Michigan’s economy. This reform would save citizens money and make Michigan an opportunity state.

The economic research demonstrating a link between taxes and growth is strong. A review of studies, published by the John Locke Foundation, indicated that lower taxes tend to lead to stronger economic growth at the state and local levels. Their review, titled “Lower Taxes, Higher Growth,” was a review of 681 academic, peer-reviewed journal articles, 115 of which involved state and local taxation. Of the 115 studies, 63 percent show “tax burdens were negatively associated with economic performance.” That is, most studies found that higher taxes harmed state and local economic growth. Only 3 percent of the studies showed a positive outcome.

The American Legislative Exchange Council publishes “Rich States, Poor States” each year, which includes economic performance and economic outlook rankings of the states. These rankings include 15 policy variables such as tax and minimum wage rates as well as a state’s debt service burden and workers’ compensation costs, to name a few.

Elected officials face pressure to “do something” to improve the economy. Instead of taking money from everyone to give to a politically favored few, the state should take a “fair field and no favors” approach to economic development. By eliminating Michigan’s corporate welfare apparatus and dedicating its revenues — and perhaps others — to tax cuts, we can give everyone a chance to create jobs and invest more, not just the people that get special treatment from Lansing. 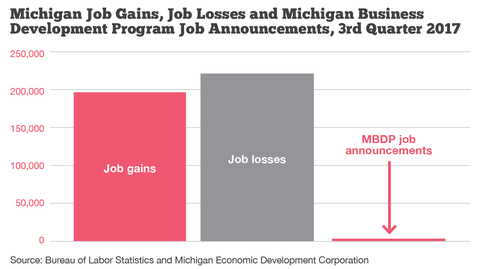