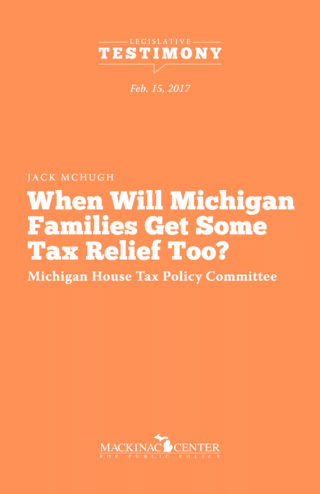 When Will Michigan Families Get Some Tax Relief Too?

The following is testimony presented to the Michigan House Tax Policy Committee by the Mackinac Center’s Senior Legislative Analyst Jack McHugh on Feb. 15, 2017.

Since 2007 this higher tax hike has transferred $6.3 billion additional dollars from Michigan families to Lansing than would have been taken otherwise.

Last year, that tax hike deprived Michigan families of $771 million they had earned.

That tax hike will take an extra $771 million or more this year too, and every year until it’s rolled back.

What did the state do with that extra $771 million?

It’s a big number but still might have been swallowed by the $1 billion in secret corporate welfare checks this state wrote to special interests last year under MEGA subsidy deals approved in 2009. More income tax dollars were transferred under deals approved by Republicans. Now there are hearings on yet another $1.8 billion for a handful of big developers.

Media pundits, progressives, the Michigan League for Public Policy, “Bernistas” and other voices on the left exhibit horror at the idea of a modest tax cut that lets families keep a bit more of what they earn. Why then are they so quiet when it comes to transferring more money to politically favored special interests?

Isn’t it the turn of regular, hardworking Michigan families and small businesses to get a better deal from Lansing too?

This state can afford it. Despite “tax cut fever” rhetoric, Lansing has hardly been on a rigorous spending “diet.” Annual appropriations have increased from $25.2 billion in 2010-11 to $31.0 billion this year. That’s $5.8 billion more to spend each year, and growing at a faster pace.

Looking at just the state’s two largest funds, the May 2016 revenue estimating conference projected general fund and school aid fund revenue of $22.5 billion this year. The January 2017 consensus upped that to $23.3 billion next year. That’s a $764.8 million increase.

The question may be not whether Lansing can afford to give back, but who you will give back to.

That 2007 tax hike damaged the state in other ways: It may have contributed to 49,000 former Michigan residents having left and taken their incomes permanently to some other state. That’s what the Mackinac Center’s Michael LaFaive and Ball State University scholar Michael Hicks found when they looked at emigration levels associated with income tax hikes.

For every 10 percent increase in personal taxes, they found an additional 4,900 people leave this state every year. And that’s even controlling for other reasons people move out of state, like more hours of sunshine.

Perhaps more immediately painful, 31 other states celebrated their own “Tax Freedom Days” before Michigan last year. Even Indiana and Ohio beat us out.

The economy won’t expand forever, and no one wants another generation having to watch their children leave the state for jobs. Michigan can’t afford not to make itself more competitive in relative tax burdens. Especially when competing against warm states like Florida and Texas that also have no income tax.

William McBride, the Tax Foundation’s chief economist, summed up the consensus of many empirical studies by academic economists on the relationship between taxes and economic growth:

“While there are a variety of methods and data sources, the results consistently point to significant negative effects of taxes on economic growth even after controlling for various other factors such as government spending, business cycle conditions, and monetary policy.”

Jack McHugh is the Mackinac Center for Public Policy’s senior legislative analyst and editor of MichiganVotes.org. McHugh has a bachelor’s degree from the University of Michigan and a master’s degree in political science from Central Michigan University. Jack McHugh’s essays on public policy issues have appeared in The Detroit News, the Detroit Free Press, The Oakland Press, The Grand Rapids Press and many other newspapers.