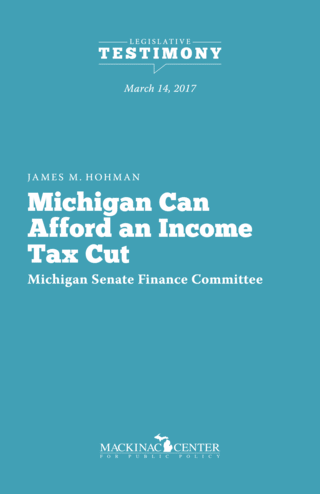 The following is testimony presented to the Michigan Senate Finance Committee by the Mackinac Center’s Assistant Director of Fiscal Policy James M. Hohman on March 14, 2017.

I don’t think I have to tell you this, but you cannot craft tax policy solely on the basis of economic efficiency theory. That is not how policy gets made. It gets made on the basis of political considerations.

Modest reductions to the income tax is the best reform that the state can accomplish right now.

And note that rate reductions influence the thousands of decisions that get made that encourage or discourage employment in Michigan. And it would get us closer to matching the rates that we see in our competitor states, like Illinois and Indiana.

Creating new exemptions and credits, in contrast, transfers money to favored groups and provides a short-term gain to them. However, the market adjusts and reduces the benefit. Only rate reductions provide broad-based gains over the long term. They energize people to work, save and invest to improve their lives and those of others. It’s a small change, but it is a long-term change that brings broad-based prosperity.

The best part is that it is affordable.

Every tenth of a percent reduction will let Michigan residents keep another $250 million more of their income. But that is not a lot in state budget terms. The state budget is expected to grow enough this year to afford to lower the tax rate to 3.95 percent without having to cut a dime from the budget.

That’s on top of a growing state budget. State money in the budget grew $5.7 billion since fiscal year 2010. The growth of the state budget only means that we’ve made decisions to spend more in Michigan. Lawmakers can also make decisions to let people keep more of their money without huge fiscal consequences.

Some have argued that the state only has the $10 billion general fund to work with in the budget. There is far more at play. State taxes generate over $30 billion, all subject to state statutes. There are plenty of dollars to move around in statutorily driven earmarks of state dollars and fungible revenues in state spending.

Even then there is more money at play in the state budget. The $321.5 million being sent to local governments for personal property tax reimbursement is the result of state statutes, but it is not considered state revenue. The $660 million expected to be paid out in business subsidies offered through tax credit agreements is further spending that revenue estimators do not consider revenue. The taxpayers paying the $660 million certainly should though.

The Governor has pointed out that there are already some tax changes in the works that need to be budgeted for. That’s true. But there is also more revenue flowing into the state budget. Even with the targeted tax breaks, credits, exemptions and reductions that have been approved of by lawmakers, state revenue of the general fund and school aid fund is expected to increase by $1.7 billion.

And it is owed to families in Michigan. The 2007 temporary tax hike has cost a typical family $1,000 thus far. That was supposed to be ratcheted down over time. The state should fulfill its older pledge to taxpayers.

It is even more affordable because there are plenty of ways to save the state money.

We’ve already budgeted $150 million or more on business subsidies, despite flimsy evidence that it improves the economy.

There’s $34 million of general taxpayer dollars in state support for agriculture research and marketing. Farms these days accounts for less than 1 percent of the state economy.

While it would take a long time realize these savings, and not all of the savings would go to the state budget, Michigan’s state and local governments could save $5.8 billion just by benchmarking the costs of benefits to private sector averages.

We’ve spent over $271 million on tourism advertising from general taxpayer dollars thus far with $34 million scheduled to be spent this year. Our tourism industry interests ought to spend their own money marketing their business. There’s money in the budget.

The Legislature has made cuts before. We spent half a billion on film subsidies before eliminating the program.

Don’t like these ideas? There is a natural place to make decisions about spending scarce tax dollars: in the budgeting process. It is the place where all of the different changes between last year and this year are realized and priorities are set.

A modest reduction in the state income tax rate is the best tax policy change we can enact right now. It’s affordable and residents deserve it.

James M. Hohman is assistant director of fiscal policy at the Mackinac Center for Public Policy. He holds a degree in economics from Northwood University in Midland, Mich.