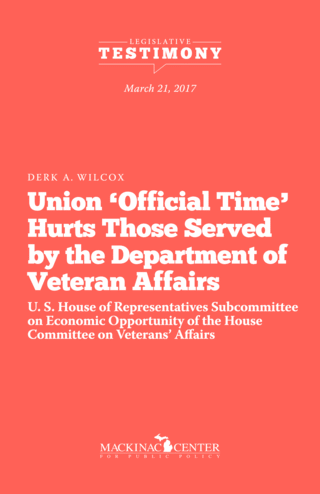 U. S. House of Representatives Subcommittee on Economic Opportunity of the House Committee on Veterans’ Affairs

The following is testimony presented to the U.S. House of Representatives Subcommittee on Economic Opportunity of the House Committee on Veterans’ Affairs by the Mackinac Center’s Senior Attorney Derk A. Wilcox on March 21, 2017.

Chairman Arrington, Ranking Member O’Rourke, and Members of the Committee:

Thank you for holding this hearing and giving me an opportunity to discuss the issue of the use of “Official Time” at the Department of Veterans Affairs.

My name is Derk Wilcox, and I am the senior attorney at the Mackinac Center for Public Policy. The Mackinac Center is a nonpartisan research and educational institute dedicated to improving the quality of life of people in its home state of Michigan and nationwide by promoting sound solutions to public policy questions.

I’d like to note that as a practicing attorney I have had the honor of representing many veterans as their court-appointed counsel in mental health, guardianship, and conservatorship hearings. I have spent many hours at the VA facility in Ann Arbor working with the staff and the veterans there.

VA hospitals are beset with many problems as they try to meet the needs of our veterans. Official Time has added to those problems. Official Time is the practice of releasing employees to perform union functions while they are paid by the government agency — Veterans’ Affairs, in this instance.

H.R. 1461 is a much-needed first step, requiring tracking and reporting the use of Official Time, and that is what I am here to testify about today.

This bill is not the first effort to track Official Time. Back in 1979 the General Accounting Office found that 18 of 26 bargaining units at four agencies had no record of Official Time usage and recommended that the Office of Personnel Management issue annual reports on its use.

Since then, agencies have been subject to different requirements by differing administrations. Hence, the need for legislation to create a standardized database which will assist effective personnel management at the VA.

Official Time has been misreported and underreported.

OPM currently reports sporadically on limited aspects of Official Time. In the fiscal year 2012, the last year for which estimates appear, OPM estimated that Official Time cost the VA $46,868,149.40. This cost represented 253,691 employees performing 1,086,257 total hours. This was up over $4 million from the previous year, when it was estimated to be $42,565,000.79. There does not appear to be published estimates from OPM for the last five years.

But even these costs are merely estimates. As pointed out in the Feb. 16, 2017, testimony before this subcommittee by William “Trey” Lawrence Kovacs III of the Competitive Enterprise Institute, these estimated costs fall short of the true costs because these fail to account for the use of office space, phones and travel by employees using Official Time.

But what the GAO did not look at is whether or not the official timekeeping itself is flawed. From my investigations, it appears that the use of Official Time is underreported. I examined cases brought before both the Department of Labor’s Employees’ Compensation Appeals Board and the Federal Labor Relations Authority. These cases involved the use of Official Time by VA employees, and Official Time was a central part of the case. In so doing I found several cases where more time was devoted to the union’s activities than was being reported as Official Time.

In a case out of the Dayton, Ohio VA Medical Center, a patient services assistant petitioned for workers’ compensation after she was injured while performing a union function. She initially claimed that she had been on Official Time when the injury occurred. But an investigation into the facts found that she had been performing a union-related function during her regular work time – not on approved Official Time. She was a union steward, and chose to attend an appraisal meeting where her presence was not required. She had been granted Official Time usage during the morning, but not during the afternoon when her injury occurred.

In another ECAB claim, this one out of the Philadelphia VA Medical Center, a medical supply assistant was injured while travelling to attend a union meeting. Again, the Board found something similar to the Dayton case: “Appellant’s supervisor and appellant both note that based on her union position she was entitled to use up to four hours a day of Official Time. However, both agree that her time sheet did not reflect that she was on Official Time at the time of injury and that appellant was in a regular duty status when her injury occurred.” Again, the Official Time keeping did not reflect that she was performing the union’s work.

Perhaps most egregious was a FLRA case out of the Medical Center at Leeds, Massachusetts. A clinical neuro-psychologist was also the union president. She was allowed to spend 60 percent of her workweek on Official Time. However, an arbitrator found that, because of her Official Time, it was an unfair labor practice to require her, as part of her performance appraisal plan, to see any patients per week. Because “official union duties placed time constraints on the grievant’s clinical schedule during the workweek” it was “unfair” to require her to see as few as one patient for testing per week. In short, what was recorded as 60 percent Official Time effectively became 100 percent Official Time. Furthermore, she was exempt from the procedures for scheduling patient “consults” — i.e., she was not required to participate in “requests from physicians or others that a veteran be seen for psych[iatric] or neuro-psych[chiatric] evaluation.” Although the time sheets would not show it, Official Time kept this neuro-psychologist from seeing any patients as a requirement of her employment.

In 2013 Senator Rob Portman, R-OH, and Tom Coburn, R-OK, wrote to the then-Secretary of Veterans Affairs, Eric Shinseki, noting that: “Documents show that your department recently employed at least 85 VA nurses, some with six-figure salaries, who were in 100 percent Official Time status.” Yet as the cases I have cited show, there are others, perhaps many, whose Official Time usage exceeds their allotment and who are effectively on 100 percent Official Time despite being on record as only devoting 60 percent to Official Time.

So while the OPM found that in VA employees spent 1,086,257 hours on Official Time, based on the cases I have cited, there is ample reason to believe that hours reported to the OPM are undercounted.

One of the common responses to the use of Official Time for union-related business is that the unions are required to represent all bargaining unit members, both dues-paying members and nonmembers. And that this universal representation requirement imposes an unfair burden on the unions in their representational activities. However, according to the VA, the union which represents most VA employees is the AFL-CIO-affiliated American Federation of Government Employees.

In fiscal year 2015 AFGE’s headquarters reported receipts of $134,852,702 on its LM-2 disclosure forms. (This number does not include the locals.) It would not be unreasonable to expect the AFGE and other unions to bear the costs of their own activities rather than shifting these costs to taxpayers and shortchanging the veterans who are supposed to be served by the VA employees who are instead on Official Time. If the burden of representing nonunion members in the bargaining unit is too great, than perhaps the unions should be relieved of that requirement in exchange for nonunion member employees being allowed to represent themselves, a.k.a., “Workers’ Choice.”

The enactment of H.R. 1461 could provide the necessary tool to properly count the hours and total cost of Official Time at the VA. Likewise, it would restrict Official Time activities so that physicians like the psychiatrist in the case above at the Leeds facility are using their skills and expertise on the treatment for which they were trained and hired, and not for union activities. Section 741(a)’s requirement that time be accounted for “accurately and to a specific degree” should eliminate the case of duty time being used for union activities, as the aforementioned cases found. Section 741(2)(E) and (F) should correct the flaws pointed out in the Feb. 16, 2017, CEI testimony before this body, which pointed out that Official Time was not accounting for fringe benefits, office space or other facilities used for Official Time. Section 742(a) correctly restricts Official Time from being used for “political activities or activities related to lobbying.” As noted above, the unions representing VA employees have annual revenues of well over $100 million — under no circumstances should taxpayers be required to fund political activities on their behalf. Lastly, and perhaps most importantly, Section 742(b) is a necessary correction prohibiting physicians and other highly skilled medical professionals from using Official Time when their unique skills and training should be used to treat our veterans.

In summary, when cases have been looked at in-depth, it has been frequently shown that employees have been using more time for union activities than has been allocated to them as Official Time. H.R. 1461 would appear to be a necessary first step to properly track how much time VA employees spend on Official Time, account for the true costs, and restrict the improper uses of Official Time. Following the enactment of H.R. 1461, we should get a more complete picture of the extent of the problem, and better enable managers to effectively use the resources available to help our veterans.

I would like to thank the subcommittee for this opportunity and will welcome any questions.

Derk A. Wilcox is senior attorney at the Mackinac Center for Public Policy. He joined the Center in June 2012. Prior to that he practiced both as a solo attorney and with various firms representing clients in a range of civil matters including litigation involving business disputes, construction and lien law, franchise contracts, real estate ownership/management disputes, and Uniform Commercial Code issues. He has also represented patients in the state’s mental-health care system and disabled clients in the probate courts.