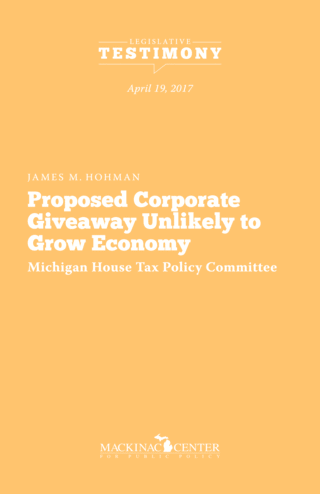 The following is testimony presented to the Michigan House Tax Policy Committee by the Mackinac Center’s Assistant Director of Fiscal Policy James M. Hohman on April 19, 2017.

Proponents of this package have branded the opposition as being “ideological” in their skepticism. But delivering hundreds of millions of taxpayer dollars to select developers based on flimsy evidence is far more ideological than the practical reasons why you should reject this proposal. Indeed, supporters seem more interested in obscuring the costs of this package rather than justifying them.

There are a number of ways that costs are being ignored. This packages uses the tax code to deliver cash to developers instead of through the budget process. There is already $100 million-plus in the state budget pledged for business subsidies. And those subsidies have to be argued for and compared against the multitude of other areas of state spending where lawmakers prioritize the best uses of scarce taxpayer dollars. This package bypasses that process.

If developers want taxpayer dollars to redevelop select places, they ought to be arguing their case in the budget-making process, and lawmakers should pledge that money this year instead of kicking it to the future, as these bills do by allowing agreements that can last 25 years.

The costs are further obscured by proponents’ argument that the development would not happen without taxpayer assistance, implying that sending tax dollars generated by the development back to the developer represents free money. Even if this “but for” presumption is accurate, and there are reasons to be skeptical, it does not make the proposal costless. Construction workers have multiple jobs that they can work on — they don’t just spring into existence when these projects are approved. When they work on other jobs their income taxes go to the state government and the state will miss out on that revenue when they work on the selected projects approved by this package. Likewise, the people who will live and work in any of these developments do not spring into existence when these buildings get built. Even if people from out of state moved into these developments, they would only be costless to the state budget if the sole purpose of their move was because they really liked the newly developed building.

The other way that costs are obscured in this proposal is through a fig-leaf, cost-benefit calculation made prior to a project being approved. The analysis uses a multiplier to estimate the benefits of the proposal but does not provide the same treatment to the costs. As the bill stands, the methods used by these analyses would likely conclude that partnering with a developer to dig a giant hole in the ground would be a net positive for the state.

While the legislation says that it is only to select “transformational” projects, there is no accountability in these bills that the projects fulfill that promise. That would require performance metrics for the communities, not just for the project, and accountability requirements for both the developers and the people approving these deals.

It is also noteworthy that there are already a handful of other programs on the books specifically for “brownfield development” and dozens more for economic development more broadly. Instead of amending these programs to address what supporters apparently believe are their obvious failures (hence the need for this new and different legislation), this just adds more favors to select businesses and developers from the pockets of taxpayers.

Michigan’s economy is transforming. We are one of the fastest growing states in the union and the best in the region. That includes the recovery of multifamily housing that appears to be targeted in this proposal. If you want to further encourage this transformation, you ought to improve the overall business climate with modest reductions in the state income tax. That would do more to boost Michigan’s economy than creating Rube Goldberg devices to deliver taxpayer dollars to select developers.

James M. Hohman is assistant director of fiscal policy at the Mackinac Center for Public Policy. He holds a degree in economics from Northwood University in Midland, Mich.