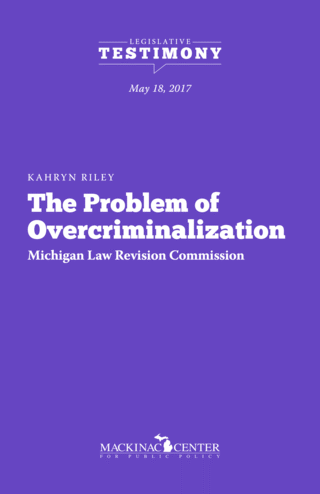 The Problem of Overcriminalization

The following is testimony presented to the Michigan Law Revision Commission by the Mackinac Center’s Policy Analyst Kahryn Riley on May 18, 2017.

Thank you, Chairman McClellan and members of the Law Revision Commission, for your time today. I am an analyst at the Mackinac Center for Public Policy, a free-market research institute in Midland, Michigan, where I study criminal justice policy.

During my comments, I’ll be addressing the problem of overcriminalization in Michigan. The term “overcriminalization” refers to the massive size of the Michigan penal code and the large number of administrative laws and regulations that carry criminal penalties.

In 2014, the Mackinac Center, in partnership with the Manhattan Institute, published a study which suggested that Michigan’s large, disorganized body of criminal law and criminally enforceable administrative regulations can ensnare well-meaning people who engage in putatively innocent conduct.

We discovered this problem after learning about a number of stories of people put into legal jeopardy by Michigan’s criminal law. One such individual was Lisa Snyder, whom the state charged with running an illegal daycare after she volunteered to help her neighbor’s children board the school bus each morning, free of charge. She was able to obtain counsel and eventually the law was changed, but many defendants might not have the resources to obtain this outcome.

Although Michiganders are expected to understand and comply with the law, most individuals have little way of knowing all of the actions that are deemed illegal in this state. There are thousands of crimes on the books in Michigan, the number of crimes are growing annually, and many violations of the state’s large regulatory code (including provisions dealing with agriculture, public health and the environment) are criminal offenses — notwithstanding that these regulations are promulgated without legislative action.

Our study recommended that Michigan repeal outmoded or duplicative laws, and that the state enact a default criminal intent standard to protect citizens who unknowingly violate criminally enforceable statutes or regulations that govern conduct that is not intuitively wrong.

We proposed these reforms for two reasons. First, a state’s criminal code should protect individual liberty and private property — not be a tool to regulate every aspect of human conduct. Second, a very broad criminal code creates a risk that prosecutions will vary markedly from jurisdiction to jurisdiction and that scarce resources will be diverted from the enforcement of serious violent and property crimes.

One of the co-authors to the study published an update this year. It noted some positive changes the state made in 2016 and 2017, and offered additional recommendations. I’ll discuss the two primary reform efforts and three suggestions briefly.

First, Michigan has made modest progress pruning outdated or unnecessary laws from our books. We repealed about 66 outdated or unnecessary laws over the last couple years, including some silly ones like the prohibition on shaming an individual who refuses a challenge to duel. But those 66 crimes make up only 2 percent of our state’s 3,100 statutory crimes, and we left in some potential candidates for repeal, such as the prohibition on entering a horse into a race under a false name.

We also added 60 new criminal offenses in that period. Many of these new crimes concern small business owners and ordinary, morally neutral activity. For example, PA 112 of 2016 specifies the type of payment a dealer or agent must use to purchase used car parts, and makes noncompliance a misdemeanor for the first offense and a felony for the second one.

Not only did we add new laws, we also passed laws that grant unelected administrative authorities the power to create new crimes. For instance, in December 2016, the Legislature passed a transportation bill which not only criminalized any offense under the act (which numbers 53 sections and 6,800 words), but also criminalized the violation of any “rule promulgated under” it.

Our second positive reform happened in 2015, when Michigan passed a default criminal-intent law. Before last year, people like Lisa Snyder, the neighborly woman I mentioned a few moments ago, could be convicted for breaking a law they didn’t know existed. Or, if they knew about the law, they could be convicted for breaking it even when they believed that they had complied with it.

The new law states that, in order to convict a defendant of a crime, the state must show that he acted with intent, knowledge or recklessness (unless the state Legislature clearly specified a lower level of mental culpability in the criminal statute). But the new law is imperfect; it does not apply to crimes committed prior to Jan. 1, 2016, and it exempts large portions of regulations where it would arguably be appropriate, such as public health law.

I’ll conclude my remarks by summarizing three important recommendations for continuing reform. First, Michigan’s penal code is massive — eight times the size of the Model Penal Code and larger than those of many of our neighboring states. We should undertake a large-scale repeal effort to prune outdated, duplicative or overreaching criminal offenses. When the state of Minnesota called a special legislative session to do this in 2014, lawmakers ended up removing over 1,000 laws from the state’s books. Lawmakers could also use this opportunity to reclassify some existing crimes as civil offenses.

Second, Michigan should reorganize its criminal code so that all mandates and prohibitions that carry criminal penalties are located in one chapter. This way, citizens can better understand what statutes apply to them and comply more easily with the law. Although the default intent requirement provides much better protection from unknowingly violating the law, streamlining and organizing all of our state’s crimes will lower the transaction costs associated with discovering and refraining from criminal conduct.

Finally, Michigan should expand the protections of our default criminal intent standard. As mentioned, there are large portions of complicated regulatory laws that are currently exempt from the law, which means that well-meaning people are still at risk of prosecution for crimes they didn’t know they were committing or even actively believed they were avoiding. This will also help judges whose job it is to review increasingly broad and complex criminal statutes to understand whether the Legislature meant to require a criminal mental state, for which elements of the offense that mental state is required, and what exactly the mental state should be.

Kahryn Riley is a Mackinac Center policy analyst. She joined the criminal justice reform initiative in June 2016, after working for two years as a regional advancement officer at the Center. Kahryn is an attorney and an alumna of Hillsdale College and Regent University School of Law. She has worked for free-market think tanks in Michigan, New York, and Washington, D.C., for the Office of the Public Defender in Norfolk, Virginia, and for Consumers Energy’s department of Regulatory Affairs.