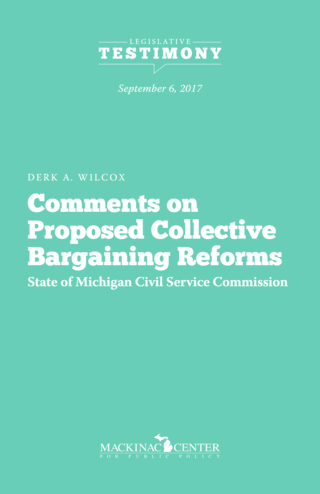 The following is testimony presented to the State of Michigan Civil Service Commission by the Mackinac Center’s Senior Attorney Derk A. Wilcox on September 6, 2017.

Commissioners James Barrett, Jase Bolger, Janet McClelland, and Robert W. Swanson, and State Personnel Director Janine M. Winters, thank you for the opportunity to comment on the proposed amendments to the rules.

The author, Derk Wilcox, is the senior attorney at the Mackinac Center for Public Policy. The Mackinac Center is a nonpartisan research and educational institute dedicated to improving the quality of life of people in Michigan by promoting sound solutions to public policy questions.

The Civil Service Commission is a constitutional body with plenary powers over the classified civil service. The Commission’s duties are set forth in Article 11, § 5 of the 1963 Constitution. In the execution of its duties, the Commission may make use of collective bargaining to inform and advise the Commission’s decisions – yet the ultimate authority still rests with the Commission and not with its bargaining partners. As the Supreme Court recently summarized in UAW v Green, 498 Mich 282 (2015):

The commission’s rules authorize the use of public collective bargaining agreements as a mechanism for exercising its constitutional authority over such matters as grievance procedures and rates of compensation.

The State Personnel Director is likewise a constitutional position whose purpose is provided in Article 11, § 5: “The administration of the commission’s powers shall be vested in a state personnel director who shall be a member of the classified service and who shall be responsible to and selected by the commission after open competitive examination.”

The State Personnel Director issued an Official Communication, SPDOC No. 17-06 on August 9, 2017. Pursuant to SPDOC No. 17-06, the director identified the following problems and reasons for needed reforms:

The employee-relations policy in Chapter 6 of the rules has not been comprehensively reviewed since the 1990s. The current policy allows labor and management to negotiate over many topics of mutual interest. Over many years, numerous complex procedures have developed beyond those covering nonexclusively represented employees. Permitting negotiations over some topics has led to significant limits to agencies’ ability to organize, manage, and reward staff and to conduct operations efficiently and cost-effectively.

Areas where differences have developed include employment preference, transfers, recall, and assignments for shifts and overtime. For example, several dozen different bumping systems that vary by union and department now regulate employment preference when layoffs occur. Union agreements have around 200 pages of varied provisions dictating how employees can be transferred based on departmental and interdepartmental transfer lists and work-location definitions. Union agreements also have around 200 pages of complex overtime-equalization provisions, which require significant resources to document compliance and can result in significant monetary penalties if mistakes are found.

The proposed amendments would streamline these areas to provide that all employees receive the same protections as NEREs. They would also provide additional employee-relations standardizations, efficiencies, or cost reductions. Staff has prepared the attached proposed revisions to Chapter 6 and other rules to implement these changes. Substantive changes include:

The proposed rule amendments should substantially improve agencies’ ability to manage operations; however, the amendments contain room for improvement.

SPDOC No. 17-06 describes the problems that have arisen where bargained for procedures have “led to significant limits to agencies’ ability to organize, manage, and reward staff and to conduct operations efficiently and cost-effectively.” The proposed amendments are well-drafted and should greatly improve agencies’ ability to efficiently and fairly manage operations. However, there some areas where the proposed rules, as amended, could be improved.

Proposed amended Rule 6-3.9(c)(6) is a new provision allowing a single officer to be absent full-time for union activities. All other union leave is potentially unpaid. However, the labor organization may reimburse the employer for associated costs of additional employees being on union leave in exchange for receiving pay and benefits as though on pay status. While the rule, as written, describes reimbursements as “all associated employer payroll costs, including wages, taxes, benefits, and retirement contributions,” this list is not necessarily all-inclusive and ought to more comprehensive.

At the federal government, the General Accounting Office and the Office of Personnel Management found that collective bargaining for union leave (called “Official Time” in the federal government) has included the use of office space, utilities, mailing costs, supplies, phone lines, travel time and costs, etc. A GAO report from 2014 criticized existing methods of accounting for Official Time. The GAO found that using a more sound method of accounting resulted in higher Official Time costs at four of the six agencies it examined. The estimates from the GAO were 15 percent higher than those calculated by the OPM because the GAO changed the method of accounting for salaries devoted to Official Time. These additional costs addressed at the federal level should be addressed here as a best practice.

Additionally, there should be a prohibition on those using leave time from moving up the pay/experience scale while on leave. If not prohibited, a civil service employee can spend the better part of her career on union leave doing the union’s business, and then return to her employing agency, perhaps in a highly technical field, and be entitled to a position of seniority despite lacking experience in that field. An example of this occurred at the federal level at the Veterans Administration where a prosthetics representative at the bottom of the scale for that job classification spent 14 years doing full-time union leave work. After those 14 years she returned to the prosthetics field and, following a grievance, an arbitrator moved her to the top of the job classification scale for such work based on her 14 years of employment. This was done despite the fact that her experience was not in the prosthetics field and she had been away so long she surely had no day-to-day familiarity with the ever-changing technology.

While, here, such a grievance might be prohibited by the new Rule 6-3.2(b)(3) provision defining seniority as a prohibited subject of bargaining, and Rule 6-9.6(b)(3)(D) removing an arbitrator’s jurisdiction over “seniority calculation,” there may still be enough “wiggle room” where such a practice is not clearly prohibited.

Furthermore, subsequent state-employer leadership could grant such a preference without altering the rules where it is not clearly prohibited. Existing Rule 2-5.2(b), which is unaltered, says that “a leave of absence” does not cause one to lose continuous service accumulated before the leave, but does not say that service accumulated freezes when one goes on leave to do union business.

Lastly, as regards union leave time, the entire practice must be carefully monitored. Existing Rule 6-3.9(c)(5) is stricken in the amendments, and replaced with a prohibition on bargaining for union leave time. However, proposed Rule 6-3.9(c)(6) still allows such leave time, so long as it is reimbursed. As noted above, reimbursement ought to be complete, and go beyond the wages and benefits listed. However, at the federal level, there is reason to believe that the time that is used for union leave/official time has been undercounted and underreported. In certain instances, it has been found that substantially more leave time was being used than had been allotted. With the striking of the old reporting requirement in Rule 6-3.9(c)(5), but the allowance of additional recompensated union leave in the new Rule 6-3.9(c)(6), methods must be in place to ensure that no more union leave is being used than what is being compensated for.

Proposed Rule 6-7, “Dues and Service Fees,” grants the director the power to establish the process for dues deduction authorizations. This would allow a director to permit annual windows of limited duration for deauthorization. The unions have argued in court that such authorizations are contractually distinct from union membership itself, and therefore may continue even after membership has discontinued. It is also conceivable that a director could authorize dues deduction processes that allow the checkoff cards or similar notifications to contain additional provisions, such as clauses whereby the employee agrees to pay a sum certain – such as the equivalent of annual dues or fees regardless of union membership. A better practice would be to allow employees to deauthrorize such payroll deduction at any time, and to restrict the process, by rule, to only allow any such agreement to only include provisions directly related to the dues withholding. Such any-time deauthorizations, set in the rules rather than left as discretionary, is consistent with the state’s policy of voluntary union support, and with existing Rule 6-5.2 allowing resignations at any time.

In proposed Rule 2-5.5(c), in regards to bumping rights, seniority is given preference over other measures of performance. “[E]mployment preference is determined by an employee’s total continuous service.” Other performance measures should be taken into account when granting employment rights such as bumping between units. Furthermore, it is not clear whether or not union leave time counts towards this continuous service. It should not. While leave time clearly retains the accumulated service obtained before that separation under the existing Rule 2-5.2(c), there is no reason to allow time spent doing the union’s business to count toward an employee gaining bumping rights. While on union leave time, the employer cannot constrain or control what activities the employee performs on the part of the union (see Michigan State AFL-CIO v Michigan Civil Service Commission, 455 Mich. 720 (1997)). Therefore, there is no assurance that the time spent advances the employee in his or her performance duties, and should therefore not move him or her ahead of others in employee rights such as bumping.

In summary, the director’s proposed rule amendments would appear to be an excellent step forward to in managing the “agencies’ ability to organize, manage, and reward staff and to conduct operations efficiently and cost-effectively.” However, there are still a number of ways that the proposed rules could be improved to ensure that the taxpayers’ money is well spent and public employees’ time is well managed to provide the residents of Michigan with public goods and services, while maintaining an efficient and professional workplace.

Derk A. Wilcox is senior attorney at the Mackinac Center for Public Policy. He joined the Center in June 2012. Prior to that he practiced both as a solo attorney and with various firms representing clients in a range of civil matters including litigation involving business disputes, construction and lien law, franchise contracts, real estate ownership/management disputes, and Uniform Commercial Code issues. He has also represented patients in the state’s mental-health care system and disabled clients in the probate courts.