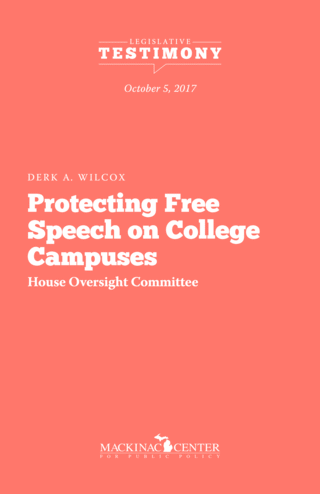 The following is testimony presented to the House Oversight Committee by the Mackinac Center’s Senior Attorney Derk A. Wilcox on October 5, 2017.

The ability to speak, write, debate and share one’s opinion without government interference is the backbone of a free society. That is why we have the right to free speech and, generally, the United States has done an excellent job protecting this right.

However, in recent years, there has been pushback against this idea. We have witnessed this here in Michigan.

The University of Michigan, Ann Arbor, tried to host a debate about the “Black Lives Matter” movement — not on whether it should exist, but rather on tactics — with students supportive of the movement on both sides of this tactical question. This debate was disrupted by threats and speakers were shouted down so that they couldn’t continue. But the worst part was that the U-M student newspaper justified the shout down and said this “did not infringe on the free speech rights of the speakers.”

Several of Michigan’s universities now have “bias response teams” and speech codes that threaten free-speech rights. These codes have sought to punish subjectively “obnoxious” or “insulting” text messages, “offensive” language, or even internet usage that included this subjective content.

Kellogg Community College is involved in a dispute over students handing out the U.S. Constitution on campus, because it was too “provocative” and because they hadn’t received permission.

It is becoming more widely accepted that speech should be restricted and that “unpopular ideas” should not even be allowed to be heard or shared. This is wrong, both on a philosophical and practical level.

Philosophically, “bad” or “unpopular” ideas are in the eye of the beholder. Ideas that were once unpopular, like the idea that government shouldn’t restrict speech, have become popular and widely accepted.

As a practical matter, allowing the majority to prevent these ideas from being shared and debated can often make them more popular or intriguing, whereas a bad idea could be refuted in open debate. People can come to believe that the bad idea is irrefutable because of the refusal to engage with it. Or it might merely become more desirable as ‘forbidden fruit’ often is. We have lost sight of what Supreme Court Justice Louis Brandeis characterized, “Sunlight is said to be the best of disinfectants.”

For the Legislature to protect free speech on college campuses through the legislative process would likely require a constitutional amendment due to the extensive powers granted exclusively to the administrators of the colleges and universities in the Michigan Constitution. While the Legislature can exert the general police powers of the state, it cannot invade the university’s autonomy in the sphere of education. Given how closely related free speech and the free exchange of ideas is to the educational mission, it is doubtful that the courts would give the nod to the Legislature if the Legislature had conflicting ideas about protecting free speech that it sought to enforce solely through its police powers rather than through a constitutional provision specifically about such oversight.

Regarding whether a constitutional amendment is necessary, and whether or not any powers therein were general or specific to free speech, I would say that, given the extensive constitutional authority that the institutions of higher education have, legislative authority, although it has been used to a limited degree, was only established after prolonged consideration by the courts. And then only to the degree allowed by the courts. For instance, in 1970 the question arose of whether University of Michigan employees were “public employees” within the scope of the Public Employees Relations Act or whether, given the autonomy the university had, it could manage its labor affairs separate from the PERA laws. It took several years to work up to the Supreme Court, which held that “a conflict between the Constitution and the statute is clearly a legal question which only a court can decide” (Regents of University of Michigan v. Michigan Employment Relations, 389 Mich 96 (1973)). And while the court there found that the Legislature could impose some parameters on employment at the university, the university retained control over those elements that touched most closely upon education:

Because of the unique nature of the University of Michigan, above referred to, the scope of bargaining by the Association may be limited if the subject matter falls clearly within the educational sphere. Some conditions of employment may not be subject to collective bargaining because those particular facets of employment would interfere with the autonomy of the Regents. For example, the Association clearly can bargain with the Regents on the salary that their members receive since it is not within the educational sphere. While normally employees can bargain to discontinue a certain aspect of a particular job, the Association does not have the same latitude as other public employees. For example, interns could not negotiate working in the pathology department because they found such work distasteful. If the administrators of medical schools felt that a certain number of hours devoted to pathology was necessary to the education of the intern, our Court would not interfere since this does fall within the autonomy of the Regents under Article VIII, section 5.

So my point is, where the Legislature exerted some control over the university, using only its existing legislative authority, it took years of litigation, and it fell to the courts to sort out the parameters because of the conflict between the Constitution and a statute. And the final determination may or may not have reflected what the Legislature at that time had intended. If additional protections for free speech were done solely by legislation without the benefit of a constitutional amendment, one could easily foresee any and every action of the Legislature requiring court resolution and taking years to process.

Similarly, if there were a new broad or general constitutional power of the Legislature over the universities, instead of one that spoke specifically to free speech, then we would again have an impasse which would require resolution by the courts, because the higher education institutions’ grant of autonomy is also general and broad. Two general powers of the same level — both constitutional in nature — would require quite a bit of hairsplitting and analysis to decide who had the proper authority in the event of a conflict.

However, where one party has a grant of specific authority, such as protecting free speech here, while the other has general authority, the courts have little trouble harmonizing the two and finding that the grant of specific power prevails in that specific area. See, for instance, National Pride at Work v Governor of Michigan, where the state’s constitutional marriage amendment conflicted with policies enacted by the state’s universities by administrators who had the constitutional general authority to manage the universities. The specific power of the marriage amendment prevailed over the general managerial powers of the universities.

Other legislative processes have been allowed to encroach on the administration of these education institutions. But, again, these were not matters directly related to education. Reporting measures, such as related to finances, have passed the constitutional test. For example, see Regents of University of Michigan v State, 395 Mich 52 (1975). I assume that extending FOIA reporting requirements had the same relatively easy path since these did not directly implicate the educational realm over which the universities have constitutional control. These laws supporting open government and transparency are more of a fit under the Legislature’s general police powers. Per that opinion:

The second sentence of [the statute] requires that a university submit to the appropriate legislative committees’ schedules for the liquidation of the debt for construction and operation of a self-liquidating project. It does not prohibit the construction of a self-liquidating project. It only provides that the legislature be informed. It affords the legislature an overview of the total ‘plant’ and a means by which to plan effectively for legislatively appropriated funds. There is no requirement of legislative approval. It provides only a method of notice of the total obligations of the universities. We find persuasive the following argument for the state by the Attorney General:

As it stands, this is a mere reporting measure, without corollary of supervision or control on the part of the committees receiving the information. Although it is, as plaintiffs claim, a pre-audit rather than post-audit provision, such reporting is merely an attempt to give the Legislature information which should be public knowledge. Universities may still enter into construction contracts for self-liquidating projects without prior legislative approval.

Lastly, even with a constitutional amendment, a potential problem that could arise under HJRP is a conflict based on the power of the purse. While new Section 10 grants the Legislature the power to “provide by law for the protection of free speech … which shall supersede any inconsistent restriction prescribed by a public institution.” It is not clear what would happen if the institution just chose to withhold funding from whatever the Legislature prescribed. Under Article VIII, Section 5, for instance, the universities retain “the control and direction of all expenditures from the institution’s funds.” The Michigan Supreme Court has said:

The Board of Regents has general supervisory control over the University and controls and directs all expenditures from University funds. It is well established that this section gives the Regents the entire control and management of University affairs, including the management of property and expenditure of funds, to the exclusion of all other departments of the State. As the Legislature may not encroach on the Regents’ power, once State funds are appropriated to the University, only the Regents may direct how they are spent.

The Legislature may put certain conditions on money it appropriates for the University which are binding if the Regents accept the money. These conditions may not interfere with the Regents’ management of the University and may be applied only to State appropriated funds. As the funds in question are not State appropriations, the defendant may spend the money for any object which is not subversive of its purpose. (citations omitted)

So imagine a case where the threat of violence was used as a pretext to deny speakers a forum, and the Legislature spoke to the matter by providing, by law, that the university had to provide “adequate protection” in such instances. Yet the universities retained their absolute discretion over expenditures of the university’s funds, and declined to allocate the necessary resources. Absent a separate allocation from the general fund, could the Legislature direct such protection? I think there is at least an argument that it could not under HJRP.

Free speech is the lifeblood of a free society. Debate leads to truth and clarity. College campuses are a core place to share and explore a variety of ideas, and the universities are doing a poor job of protecting the rights of their students and allowing them to be exposed to differing points of view. For these reasons, I support House Joint Resolution P.

Derk Wilcox is senior attorney at the Mackinac Center for Public Policy. He joined the Center in June 2012. Prior to that he practiced both as a solo attorney and with various firms representing clients in a range of civil matters including litigation involving business disputes, construction and lien law, franchise contracts, real estate ownership/management disputes, and Uniform Commercial Code issues. He has also represented patients in the state’s mental-health care system and disabled clients in the probate courts.