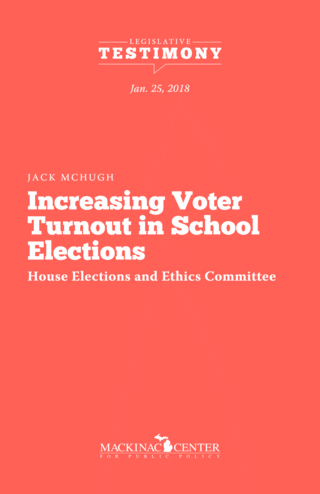 The following is testimony presented to the House Elections and Ethics Committee by the Mackinac Center’s Senior Legislative Analyst Jack McHugh on January 25, 2018.

These bills advance a reform project that frustrated legislators throughout the 1990s: election consolidation. At that time so-called “stealth” tax-hike elections — usually scheduled in the dead of winter — were rampant and caused a great deal of anger and resentment across the state. That is not a good thing for democracy, no matter how badly certain interests may want to get a property tax approved.

The problem was largely solved by a comprehensive reform package enacted in 2003, which MichiganVotes.org described as “requiring all elections in the state, including school elections, to be held on one of four designated Tuesdays in February, May, August and November.”

In 2015 the February date was limited. There have also been several bills introduced since 2003 that, like this one, would refine this system by limiting tax hike votes to the election dates most likely to attract the participation of “regular” voters.

Michigan voters are well “trained” to go to the polls in November and August of even years, when matters of statewide import (like the makeup of the Legislature) are always on the ballot. They are less well trained to vote in May, when there may or may not be something on the ballot, and also in odd-year August and November elections — although for many the even-year habit carries over for those votes.

The introduced bill limited property tax hike votes to November elections in even and odd years. The substitute added August elections. My colleagues at the Mackinac Center would prefer even-year Novembers only, but this is still useful progress.

We are less enthused, and even somewhat troubled, by another provision added to the substitute, which carves out an exception allowing May elections authorizing property tax hikes on business property only. We think you should consider very carefully the message this sends to the state’s job providers and remove this provision.

On the one hand the provision permits nothing new: Schools are already free to seek tax-hikes on nonhomestead property in May elections. The problem with the exception is the changes it makes to the incentives that operate on school boards.

Consider: If the substitute were enacted in its current form school boards would have a choice. They could request higher taxes from both resident homeowners and business property owners in August or November — which would be harder to pass because those elections tend to have higher turnout. Or they could improve the odds of passage by asking May voters to stick it to business owners only.

We hear endless talk in this building about “jobs, jobs, jobs,” but creating an incentive for tax-hungry school boards to jam a property tax on business property only is not good for jobs.

We probably still like the bill, but it’s a tougher call than it should be. Without that provision we could be a lot more enthusiastic.

Thank you for the opportunity to testify.

Jack McHugh is the Mackinac Center for Public Policy’s senior legislative analyst and editor of MichiganVotes.org. McHugh has a bachelor’s degree from the University of Michigan and a master’s degree in political science from Central Michigan University. Jack McHugh’s essays on public policy issues have appeared in The Detroit News, the Detroit Free Press, The Oakland Press, The Grand Rapids Press and many other newspapers.