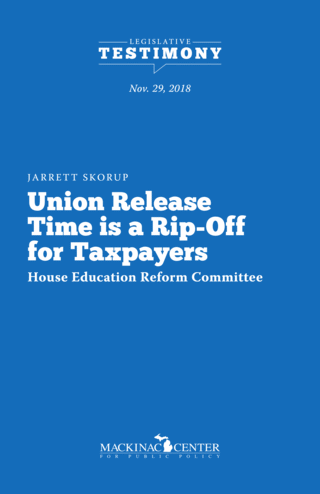 Union Release Time is a Rip-Off for Taxpayers

The following is testimony presented to the House Education Reform Committee by the Mackinac Center’s Jarrett Skorup on November 29, 2018.

For years, unions across Michigan have used school districts as personal piggy banks to fund a pricey privilege known as “release time.”

These are “ghost teachers” — paid by taxpayers, but not actually in the classroom working for the public. Here’s how it works: The local union gets a school district to allow union officials to spend part or all of their time working on union business, instead of teaching students. These districts pay the salary and benefits for these officials in addition to having to hire an extra teacher to actually work in the classroom.

This release time scheme is nothing short of a rip-off from the perspective of taxpayers. Many of these union officials make six-figures, and taxpayers have to pay those salaries, even though the person earning it isn’t providing a public service.

As of 2015, about 70 districts have these types of arrangements at a direct cost to taxpayers of about $3 million every year. According to a public records request with the state, as of last school year, 177 public school employees across Michigan are paid by their districts to perform union duties for some portion of their time. But that doesn’t include what districts have to spend replacing that employee in the classroom or the added health care or pension costs the taxpayers will be paying off for decades.

The Taylor school district, which has run deficits year after year, spends well over $100,000 for four union officials’ release time. Both the president and vice president of the teachers union and other administrative staff work part-time for the district and part-time for their unions.

At Chippewa Valley, the district spends more than $140,000 so that the union president can devote 100 percent of her time working on association business. The vice president of the union spends 40 percent of his time doing the same.

Not all of these arrangements are full-time. Berkley pays $128,000 for its union president to split his time, half for the union and half for taxpayers — each paying $64,000.

While these are large districts, this practice is not vital for schools. The vast majority have no paid union release time — including Detroit Public Schools Community District, our state’s largest district. Schools can operate just find without providing union release time.

Michigan taxpayers expect their money spent on schools to actually go for educational purposes. If unions want to spend time lobbying or advocating, they are free to do so — but they should do it on their own dime.

Jarrett Skorup is the director of marketing and communications at the Mackinac Center for Public Policy. In this role, he is in charge of marketing efforts, media strategy, and overseeing policy campaigns and objectives.