It is common today for states, counties and municipalities to give special tax treatment to certain business or industries. These favors often come in the form of tax credits or tax deductions, loans or loan guarantees, or just plain cash subsidies. The total value of these tax incentives is difficult to pin down, but national estimates suggest they amount to tens of billions of dollars annually.[1] Michigan has its fair share of similar programs that effectively hand out hundreds of millions of dollars each year to select companies and thus reduce state revenues.

Proponents of these type of incentive programs — or corporate handouts — claim that they are necessary to grow a state’s economy. They argue that some businesses will only expand and grow if the state lends a hand. A related argument is that some industries are so vital that the government must prevent firms in them from failing or relocating, lest the entire state suffer. And, most common of all, they say that these programs are tools the state must use to compete with other states who are also offering special tax treatment to firms that invest there.

Despite these varied rationales for corporate handouts, they all rest on an important assumption: Politicians who create these programs and the bureaucrats who run them possess the knowledge required to determine which companies should be subsidized and which ones should not. When considering the complexity of all the economic activity that occurs in a state — activity influenced by millions of individuals interacting with each other through markets and prices that are themselves influenced by millions of others on a national and even global scale — this seems highly improbable.[*] And, in fact, this is what the overwhelming majority of the economic research on the topic suggests: incentive programs do not grow a state’s economy.[2]

Even before economists had the tools and data to test and find these programs to be ineffective, many Michiganders were skeptical of their value. Some rejected the innate unfairness of these programs: By design, they provide benefits to a favored few, largely at the expense of the rest. Indeed, tax incentive programs and government subsidies to private industry were not used in Michigan until recently in the state’s history. In fact, Michiganders repeatedly ratified constitutions that explicitly outlawed these types of programs.

This paper chronicles the legal history of Michigan’s use of corporate handouts, spanning from the ratification of the state’s first constitution in 1835 to the ratification of the current Michigan constitution in 1963. It describes the developments that led to the state’s strong prohibition against tax incentives, and the repeated legal challenges to this policy. It outlines the rationale used in important Michigan Supreme Court opinions, which consistently rejected the constitutionality of corporate handouts until the middle of the 20th century.

[1] This is sometimes referred to as “the knowledge problem.” For more on this, see: Michael LaFaive and Michael Hicks, “MEGA: A Retrospective Assessment” (Mackinac Center for Public Policy, April 12, 2005), 66–69, https://perma.cc/55FW-4DHD. 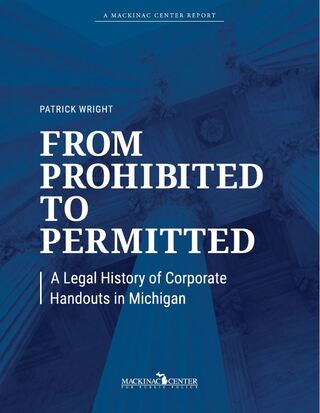