The Good Neighbor Authority is at least partly inspired by the efforts of former Reagan-era Secretary of the Interior James G. Watt, who pushed federal agencies to implement a “good neighbor policy” with states.[55] The GNA has been recently authorized under both the 2014 Farm Bill and 2014 Appropriations Act as a means to encourage federal agencies to recognize the importance and value of working collaboratively with state governments in managing federal lands. Under the GNA, states can oversee watershed restoration and necessary forest management projects for the Forest Service.[56]

Support for the GNA program is based on a critique of federal lands management, specifically that federal land managers — facing budget and staffing restrictions, regulatory and legal impediments, and a variety of other pressures — have not been able to effectively manage the lands over which they have authority.[*] Many national forest lands have been stuck in the process predicament and left in an increasingly unmanaged state while permitting and planning activities drag out for years or even decades. Unmanaged and overgrown lands have become a safety hazard and entry point for disease and insect infestations. Dead and dying forests, with heavy loads of shrubs and grasses, become magnets for fires in drier seasons, risking the forests themselves, as well as adjacent state lands and private properties.[57]

The best method of managing this “tinder box of old-growth trees ravaged by disease and insects” is through actively removing heavy fuel loads, by spacing and thinning overgrown stands, removing dead or dying trees and lessening thick brush and grass.[58] Failing that active and deliberate style of forest management, recent history has demonstrated, another form of fuel removal and forest renewal will occur. If human managers cannot or will not reduce fuel loads in federal forests, then age, wildfire, disease, and pest infestations will do it for them, often with substantial costs for both national forest budgets and adjacent property owners.[†]

Under the GNA program, state and federal governments are able to cooperatively ensure that essential forest and watershed management activities are being carried out. With their new ability to manage at a much larger scale — with private lands, state lands, and now some federal lands open to management opportunities — state foresters are able to manage at a landscape or ecosystem-wide level.[59]

Balancing management across a more diverse landscape allows forest managers to meet a broader mix of ecological, recreational and economic requirements. At the same time, they can reduce the potential for large-scale wildfires and better control the pest and disease infestations that have plagued many national forests over the past several decades.[60] This type of management, however, does mean that the preservationist, nature-first mindset that has influenced federal lands management cannot be the only management option. More intensive management activities — harvesting, road building, silviculture, and maintenance — are an essential aspect of maintaining overall forest health and biodiversity.[61] The GNA program is still in its early stages, and the areas open to state managers are limited, though growing.

Michigan reports that it was the second state to take advantage of the GNA program, with the Forest Service and the Michigan Department of Natural Resources signing a 10-year agreement in October 2015. After signing the initial agreement, timber contracts were approved for areas in the Huron-Manistee National Forest in Michigan’s Lower Peninsula in 2016. In these sales, the Michigan Department of Natural Resources serves as a proxy, working with the Forest Service by overseeing and awarding timber contracts on federal lands to private contractors who do the work as prescribed by federal managers. Timber sale revenues are retained in the state to help ensure further work on the forests can continue.[62]

The success of this first contract is a great example of how this partnership will continue to maintain and create healthy forest conditions, as called for in the national forests’ management plans, while providing additional wood fiber to industry.[63]

More projects are being targeted in the Hiawatha and Ottawa National Forests as well as Huron-Manistee. In 2018, Good Neighbor Authority timber sales are expected to reach 3,639 acres across the state.[‡] Michigan’s Department of Natural Resources is working within each national forest to identify Good Neighbor Authority projects for 2019, with work expected cover around 6,000 acres.[64]

[*] Secretary of the Interior, Ryan Zinke, expressed this concern in a July 17, 2018, meeting where the author was present. The meeting, which took place at the Department of the Interior, was held to explain the agency’s reorganization efforts. Zinke noted that the agency needed to be a “business partner rather than adversary” and a “better neighbor” with the states. He went on to describe how much of the fire hazard, weeds and invasive species that states were dealing with were coming from federal lands. The secretary has repeatedly called for the department to be a better neighbor and partner in other public presentations as well. “Interior Sec. Zinke Favors ‘Good Neighbor Policy’ For National Parks” (KELOLAND TV, May 25, 2018), https://perma.cc/V3UD-CQBW. 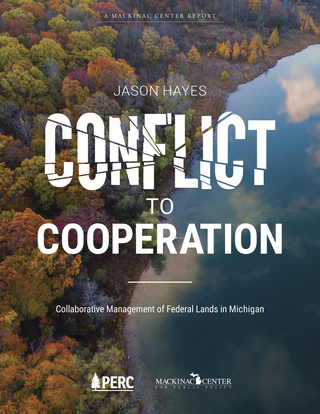