Each commissioner may submit one proposal for each of the three types of representative districts. After at least one redistricting plan for each type of district has been proposed, the commission must publish them and any additional data or information used to develop the plan. Then the commission must hold at least five public meetings to gather feedback from attendees.

Redistricting plans must meet certain specifications. Districts must be of equal population and comply with the U.S. Constitution and federal laws. They must be geographically contiguous, “reasonably compact,” and “reflect consideration of county, city, and township boundaries.”

Proposal 2 states that districts drawn by the commission may not “provide a disproportionate advantage” to a political party or “favor or disfavor” a politician or political candidate. This is to be measured “using accepted measures of partisan fairness.” Plans must then be tested based on these criteria. The proposal does not specify how this testing will be accomplished, only that the commission will use “appropriate technology” to ensure the plans meet these criteria.

The commission must issue a public notice and provide 45 days for the public to review and submit comments on each plan it will vote on. A similar procedure is used by other public agencies that propose and implement state regulations and policies.[†]

Following the window for public comment, the commission votes on which plan to adopt. Each commissioner can submit one plan for each type of district for final approval. Commissioners then rank the plans according to their preference, with the plans receiving points based on this ranking. For instance, if there are three plans under consideration, each commissioner would assign three points to the most-preferred plan, two points to the second-preferred plan and one point to the least-preferred plan. The plan receiving the highest number of points will then be adopted.

After a plan has been adopted, the commission must publish it within 30 days. It must also issue a report that explains why a majority of the commissioners chose the plan and how it meets the requirements imposed by Proposal 2. Commissioners who disapprove of the adopted plan may include a rationale for their dissent as part of these reports. There is no deadline for when these reports — one for each type of redistricting plan — must be completed and made public.

The adopted plan then becomes law 60 days after it has been published. It may still be challenged in court, and Proposal 2 gives power to the Michigan Supreme Court to review such challenges. The court may send the adopted plan back to the commission, if, in its view, it fails to comply with the requirements of Proposal 2, the U.S. Constitution or federal law. No other guidelines are provided as to what the commission must do if this occurs.

[*] These meetings are to be held “throughout the state.” It is not clear what this requirement demands exactly. 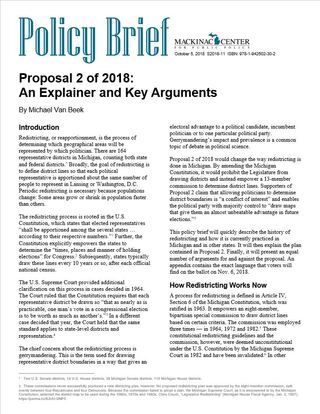