Dedicating more funding for roads is challenging for a number of reasons. First, Michigan voters recently sent policymakers a very clear message about raising state taxes to pay for some of the projected costs of improving roads. Proposal 1 of 2015, which would have increased the sales tax, fuel taxes and vehicle registration taxes, and raise an estimated $2 billion additional state revenue, was rejected by 80 percent of voters.[70]

Second, although the Legislature has allocated more of its general purpose funds to roads in recent years, this is probably not a good strategy for getting roads the funding they need moving forward. The Legislature has a large range of spending interests, and funding for roads would constantly be competing with all these interests.

In addition, dedicating a significant amount of the state’s general fund to roads would be a radical shift in spending priorities. Graphic 26 below shows the composition of the state government’s $56.3 billion budget for fiscal year 2018.[†] Public schools and health and human services represent nearly three-quarters of Michigan’s budget, with HHS comprising nearly half of it. 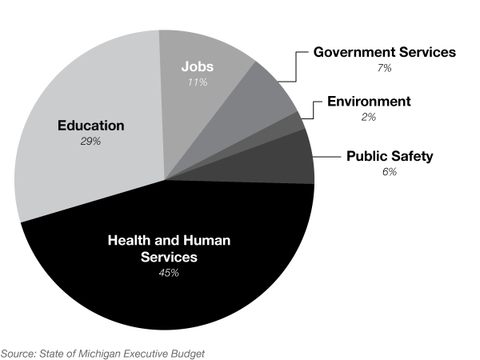 Compare this to Michigan’s budget for fiscal year 2000, as shown in Graphic 27. Adjusted for inflation, Michigan had a $50 billion budget then and HHS (as indicated by “Community Heath” and the “Family Independence Agency”) was only one-third of the Michigan’s budget.[‡] HHS spending has since increased from $17 billion to $25.5 billion. Even assuming a significant amount of this spending results from programs receiving matched federal funds, this increase still represents at least an additional $2 billion more annually being spent on HHS purposes.

Just from this cursory view, it is clear that the state has prioritized spending on health- and medical-related services above all other priorities. If this trend continues, and especially if state revenues start to decline, it will be even harder for legislators to allocate more general fund money to roads, unless their priorities significantly change. 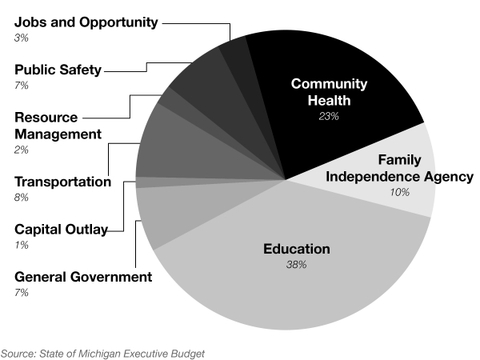 [†] The “Jobs” category appears to consist of funding for transportation, workforce and economic development, and licensing and regulatory affairs, with the largest component being the $4.1 billion in total transportation funding. 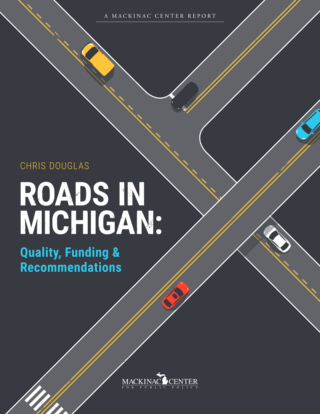