It is of course far easier to point out the many flaws with the no-fault system than it is to come up with reasonable solutions to the many problems. One option, of course, would be to return to the previous tort-based system, similar to what is used in many other states. It may be an expensive and difficult transition from Michigan’s current no-fault system, however. Although it’s difficult to predict the effects of a major change such as this, it could potentially result in even higher premiums than Michiganders pay today, especially if there are no limitations placed on tort claims. Taking this into consideration, the more prudent approach would be to reduce or remove the key drivers of high insurance premiums in the current no-fault system. Below are some suggestions that would likely reduce the costs of insuring a vehicle in Michigan but keep the core concepts and goals of a no-fault system in place. 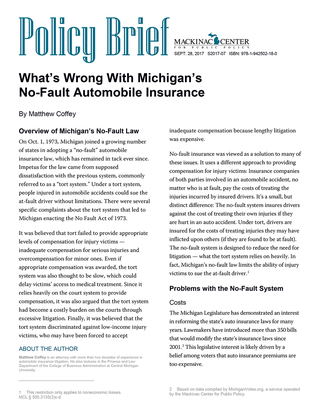