Subjecting all current licensing requirements to this type of review would no doubt result in removing a significant number of licenses in Michigan. But repealing a license does not necessarily mean the state could no longer provider any type of regulatory oversight — there are numerous alternatives to mandatory licensing. Michigan could, for instance, have optional certification, subject certain industries to health inspections, require an insurance bond before work could be performed, give the attorney general more power when investigating fraud, and more. Whatever concern that is raised when it comes to a discussion of repealing a license, there are many options available that could add consumer protections without locking people out of work.

The Legislature should implement a “sunrise and sunset” process by empowering a committee or independent board to analyze new licenses before they are implemented and existing licenses on a continual basis. This review committee would be charged with finding the least restrictive means of regulating an occupation. The executive branch could also be authorized to actively supervise current licensing boards to prevent overly broad and restrictive rules.

Specifically, to increase opportunities and rationalize occupational regulations, Michigan should use the least restrictive type of regulation. The inverted triangle below shows the array of alternatives that lawmakers could use to regulate an occupation. When considering a new regulation or evaluating an existing license, policymakers should start at the top of the inverted pyramid to select the first level of regulation sufficient to address the state’s specific interest in protecting consumers. 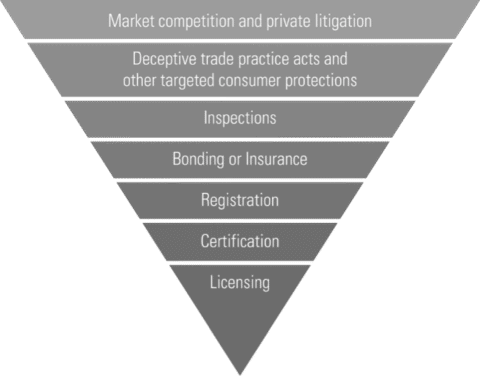 Lawmakers should only move to a lower level — more restrictive — regulation if there is an identifiable market failure. The idea behind this inverted triangle is to prevent restrictions on competition and work by jumping immediately to the most harmful regulatory option.

If the government is concerned about people in an occupation deceiving or defrauding customers — for example, with a roofer promising to shingle a house but not delivering the service — they should not jump right to licensing. Instead, law enforcement could be empowered to prosecute fraud or deceptive trade practices (in most cases, they have this power already).

If lawmakers are worried about cleanliness — for example, a dirty barber shop — they could mandate inspections. For restaurants, the state does not require licenses for cooks or waitresses, but rather attempts to ensure food safety through regular health inspections. The same could be done for other businesses and could potentially provide better health protections for consumers than licensing does.

If these measures don’t address the concerns, the state could move to the next level. For contractors, a stated concern is that without a license, people would be more likely to cause property damage. But if that is the worry, the state could require those working in that occupation to purchase insurance, rather than forcing them to get a license.

The next level down is registration. Under this regulation, the state would not mandate qualifications, but instead workers in some occupations would register their business with the state. This could help prevent fraudulent providers, while not overly restricting everyone else.

One key point made by advocates of licensing is that if a person is not licensed, there is no way to know if they are good at their job. In other words, the consumer is at a disadvantage by having less information than the providers of a service. This fear is overstated — the arbitrariness of licensing suggests it doesn’t provide much valuable information to consumers — but if it is a genuine issue, it can be addressed by the next level of regulation: certification.

Certification would allow individuals who went through the state’s required education, training, and tests to be granted the privilege of using the title “certified.” For example, anyone could work as an interior designer, but only those who met the state’s qualifications could call advertise themselves as a “certified interior designer.” This would not block entry for people wanting to work, but does signal to consumers which providers have completed some sort of state-sanctioned certification process.

If all of these alternatives are deemed insufficient, then and only then, should the state consider creating a license. This should be needed only for a small group of occupations, as is suggested by the shape of the inverted triangle.