Though ranked near the middle of the pack among the states for the prevalence of occupational licensure, Michigan has many licensing requirements that are considerably out of proportion when compared to national norms. There are two main ways to judge proportionality: occupations where Michigan mandates a license when a majority of states do not and by the amount of fees, tests and other requirements Michigan mandates compared to the average in other states.

Of the 42 low- and middle-income occupations that the state licenses — and highlighted in the IJ study —14 of them are rarely licensed in other states. The following table lists these licenses and the number of states (and the District of Columbia), including Michigan, that require a similar license.

Graphic 2: Licenses Michigan Requires that Most Other States Do Not 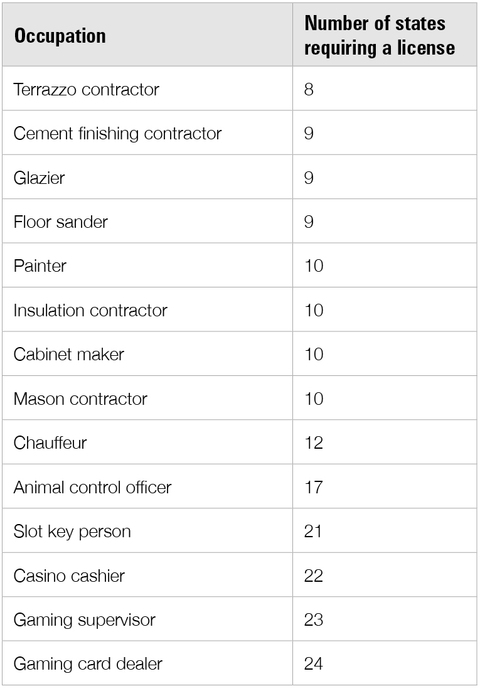 Other licensing requirements seem inconsistently applied, especially from the perspective of protecting public health and safety. For instance, “maintenance and alteration” contractors — carpenters, concrete workers, masons, excavators, insulators, painters, roofers, floorers and more — are required to take 60 hours of classes (which costs around $650), pass an exam and pay $200 in fees.[46] But auto mechanics have no educational mandates and simply have to pass a $6 test and pay $25 in license fees.[47] It is unlikely that the contractors listed above are doing work that is significantly more dangerous or relevant to the health and safety of the public than the work that auto mechanics do.