Appendix A: The Econometric Analysis*

In this appendix, we discuss the empirical models and results used to produce the casual and commercial smuggling estimates presented in this paper. The results of this study build upon the existing literature, in which much support appears for the existence of substantial tax-induced cigarette smuggling, both casual and commercial.

Much of this literature employs empirical models of representative consumer demand, including such variables as cigarette price, tourism, income, race, religious affiliation and other demographic variables, in addition to the primary variables of interest: tax (or price) differentials; American Indian and military population; and distance from North Carolina.

The empirical method chosen here does not estimate consumer demand; rather, it follows the two-stage method proposed by LaFaive, Fleenor and Nesbit in 2008. We first estimate in-state consumption and then use the residual from that regression as a measure of smuggling. We then take that measure of smuggling (unexplained state sales) and regress it as a function of tax differentials and other commonly employed variables used to describe casual and commercial smuggling.

Legal per-adult, tax-paid cigarette sales (hereafter per-adult sales) can be defined as the sum of in-state consumption and net smuggling, as presented in Equation 1:

i is the state, and

t is the year.

Our first-stage regression equates to a naïve version of Equation 1, in that we do not control for any smuggling. Instead, we include only measures of in-state consumption on the right-hand side of the equation. If the smuggling of cigarettes is not prominent, then sales within the state will be approximately equal to in-state consumption. However, if smuggling is a prominent feature of the cigarette market, such a naïve model will fail to explain a large percentage of the variation in per-adult sales, resulting in residuals of large magnitude.

The sign and magnitude of the residuals from the estimation of the naïve model are of particular interest to us. Specifically, for low-tax states, the naïve model should systematically underpredict actual sales, as consumers from other states travel across state and international borders to purchase cigarettes there. Thus, actual sales in the low-tax state should exceed the consumption within the state, resulting in a positive residual. Similarly, the naïve model should systematically overpredict actual sales for high-tax states, resulting in a negative residual, as in-state residents choose to purchase cigarettes from nearby lower-tax states, Indian reservations, military bases or from illegal markets.

In order to estimate our naïve model of per-adult tax-paid cigarette sales, in-state per-adult consumption is characterized by Equation 2:

where Smoke is the percent of the state’s adult population who are smokers (known as “smoking prevalence”),

Intensity is the average number of packs consumed during a year by the state’s smokers, and

R is a parameter between zero and one allowing for the underreporting of smoking prevalence.

where ƒ(Trendt) represents the above-described linear function of smoking intensity and its systemic underreporting.

We estimate our naïve model of per-adult sales using state-level data for the U.S. continental states for the period 1990-2009. North Carolina is excluded from our sample because it is modeled as the primary source of commercially smuggled cigarettes in the second stage regression.

Descriptive statistics and sources for all variables used in this study can be found in Graphic 1. All dollar amounts are represented in 2009 prices.

Graphic 2 presents the maximum likelihood estimates of our naïve model corrected for groupwise heteroskedasticity to allow for nonconstant variance across states. We present both linear (Columns 1 and 2) and log-linear (Columns 3 and 4) specifications for robustness, but the log-linear specification appears to more closely fit the data and hence is the preferred specification.

Per the results presented in the final two columns of Graphic 2, a 1 percentage point increase in the smoking prevalence rate results in a 5.8 percent increase in per-adult sales in the state. Furthermore, per-adult sales are shown to decrease by an average of 1.7 percent per year, which we attribute to the decline in smoking intensity over time. 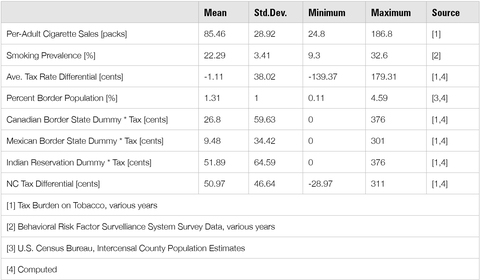 Note: All prices are represented in constant year 2009 dollars.

Note: Statistical significance of 1 percent, 5 percent and 10 percent are represented by ***, ** and *, respectively. Results are corrected for groupwise heteroskedasticity via the HREG command within NLOGIT 3.0. Regressions include state fixed effects; these are withheld here for space considerations, but are available upon request.

As mentioned above, it is not the coefficient estimates from the naïve model that interest us; rather, it is the model’s residuals that are important. State with high tax rates relative to their neighbors and to North Carolina are expected to have residuals that are negative and large in magnitude, with predicted per-adult consumption exceeding the state’s observed per-adult sales, suggesting that the state’s consumers are obtaining their smokes in other jurisdictions or markets. Low-tax states are expected to have residuals that are positive and large in magnitude, with observed per-adult sales exceeding predicted per-adult consumption, suggesting that the states are net exporters of smuggled cigarettes.

We attribute most of the variation of the residual from the naïve model to the occurrence of “casual” and “commercial” smuggling. Casual smuggling can take the form of cross-border shopping between states; cross-border shopping either in Mexico or from Canada; or the purchase of untaxed cigarettes on military bases and Indian reservations by nonmilitary personnel and nontribe members. We include the weighted average tax differential — i.e., home state tax rate – weighted average border state tax rate — between the home state and the bordering states to account for tax-induced shopping across state lines. Similar to Coats’ 1995 study, the average border tax rates are weighted by county border populations.[51]

To capture the impact of the presence of Indian reservations, we include the sum of the state excise tax and the federal excise tax rate for those states with Indian reservations. This is effectively the tax differential between the home state and the tribal land, since taxes are not generally applied to cigarettes sold on Indian lands.[‡]

Ideally, we would also like to include the tax differential with Canadian province(s) and Mexican state(s) for any U.S. states bordering Canada or Mexico. Unfortunately, accurate data on such tax rates, particularly for Mexico, were not available. Exchange rate fluctuations would further complicate the calculation of these tax differentials. As such, we simply include the sum of the home state excise tax and the federal excise tax for those states bordering either Canada or Mexico.

As described in Thursby and Thursby’s 2000 paper, commercial smuggling primarily occurs either by “diversion” or “over-the-road.”[52] Diversion involves the manipulation of accounting records, reporting only a portion of the sales.[§] Over-the-road smuggling occurs when bulk cigarettes are purchased legally in low-tax states and shipped to higher-tax states, where the cigarettes receive counterfeit stamps and enter legal markets.[**] Our empirical model controls only for over-the-road smuggling, as has been common in the literature, with the exception of Thursby and Thursby (2000).

North Carolina has generally been modeled as the primary source of commercially smuggled cigarettes, and we follow the same convention. The tax differential between the home state and North Carolina is included as our measure of commercial smuggling. Distance from North Carolina is not included in the model, since much of the previous literature suggests that transportation costs account for less than 1 percent of cigarettes’ total value. As such, transportation costs should exert a negligible impact on smuggling.[53]

With the exception of the coefficient describing net smuggling to Canada, all estimates are of the correct sign and are statistically significant. An increase in the tax differential with North Carolina (our measure of commercial smuggling) is shown to reduce net smuggling out of the state, indicating an increase in commercial smuggling of cigarettes from North Carolina. States bordering Mexico or containing Indian reservations, and particularly states with larger tax rates, are shown to experience significantly increased smuggling imports from Mexico and the reservations, respectively.

The implications concerning casual smuggling are not as clear, as the coefficient of average tax rate differential is positive while the interaction term is negative. However, given the mean percent border population of 1.305, the impact of a $1 increase in the average tax differential is clearly negative, leading to a 0.161 percent reduction in net casual smuggling out of the state.[††] This is consistent with the expectation that the larger the home tax rate is relative to the average bordering tax rate, the greater the net smuggling imports will be from the lower-tax neighboring states. 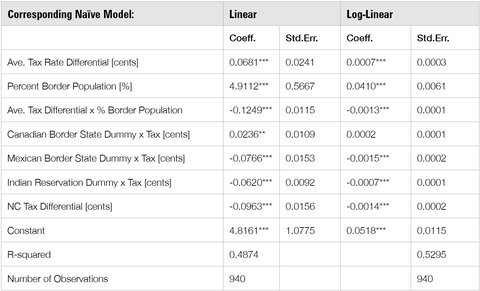 Note: Statistical significance of 1 percent, 5 percent and 10 percent are represented by ***, ** and *, respectively.

Given the above estimation results, we compute smuggling by type as a percentage of estimated cigarette consumption in the state. Graphic 5 presents our state-level estimates of the percent of estimated cigarette consumption that was smuggled, both by type of smuggling and in total, for 2014, the last year in our dataset. Those states for which the percentage smuggled is negative are net importers of smuggled cigarettes. 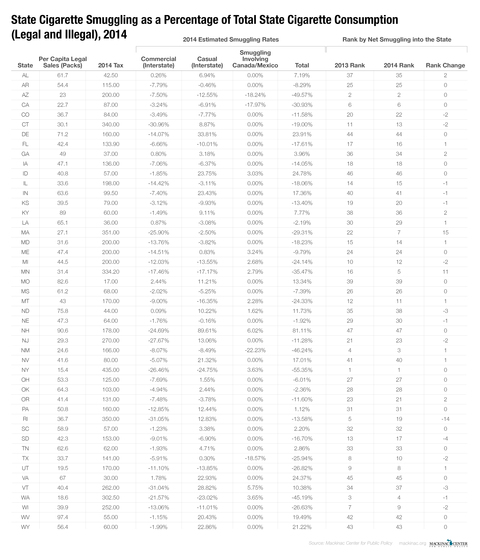 * Some of the language included in this appendix appears in previously published Mackinac Center reports.

[†]Some evidence suggests a systematic underreporting of cigarette consumption in surveys such as the BRFSS; however, any such bias is likely to impact smoking intensity figures, not smoking prevalence. See Kenneth E Warner, “Possible Increases in the Underreporting of Cigarette Consumption,” Journal of the American Statistical Association 73, no. 362 (1978), https://perma.cc/Q9UJ-L3B9; Michael LaFaive, Patrick Fleenor and Todd Nesbit, “Cigarette Taxes and Smuggling: A Statistical Analysis and Historical Review” (Mackinac Center for Public Policy, Dec. 2008), 74, https://perma.cc/ZTR2-DCTP.

. [‡]Many states, including Michigan, have recently reached agreements with at least some tribes that have agreed to collect the state tax on sales of cigarettes to nontribe members. [§]As indicated earlier in the paper, the term “diversion” is used by the ATF to include both “diversion” and “over-the-road” smuggling as defined here by Thursby and Thursby. [**]Typically, the retailer sells these cigarettes at the market price and pockets the money saved by not purchasing the cigarette stamps required by law. The retailer may have paid the over-the-road commercial smuggler more than he or she would have paid a legal cigarette distributor, but the retailer’s after-tax profits will still be higher than they would have been if the retailer had bought the cigarettes and stamps legally.

[††]Admittedly, this figure is not large in economic significance. Nevertheless, the number is statistically significant, and it should be remembered that cross-border casual smuggling is only part of smuggling overall. Commercial smuggling rates respond quickly to cross-border tax differentials, and even with the relatively small percentage impact of tax differentials on casual smuggling, we see that tax changes have a noticeable impact on smuggling, both in total and in each component of smuggling.