What the Research Literature Says

The problem with the 27 percent union wage premium figure that the AFL-CIO and others cite is that it does not take into consideration inherent differences between unionized and nonunionized workers. For instance, union workers may be more likely to work in occupations that already pay a higher wage on average compared to the occupations in which nonunion workers are more likely to be employed in. Or maybe unionized workers just happen to be older on average than nonunion workers and are therefore commanding higher wages as a result of their experience. Or perhaps union members are more concentrated in certain regions in the U.S. where the cost of living and wages tend to be higher — in the Northeast, for example.

A better analysis of the union wage premium would take these factors into account and previously published academic research has done this. Two studies worth noting use a sophisticated regression analysis to control for differences between union and nonunion workers in an attempt to estimate an “apples-to-apples” comparison of average wage differences between these different types of workers.

In a 2002 study, economists Barry Hirsch and Edward Schumacher controlled for such factors as age, education, experience, industry and geographical region to estimate the average difference between union and nonunion worker wages. They found that the average union wage premium for private sector workers was 20 percent in 2001, down from 26 percent in 1984.[3] David Blanchflower and Alex Bryson employed a similar statistical model in their 2003 study and calculated the union wage premium for private sector workers to be 16.5 percent in 2002.[4]

These studies suggest that the 27 percent union wage premium figure that the AFL-CIO and other unions tout is, at best, dated. Based on the available government data used in these types of studies, it’s likely that the average union wage premium is much lower and has declined over time. 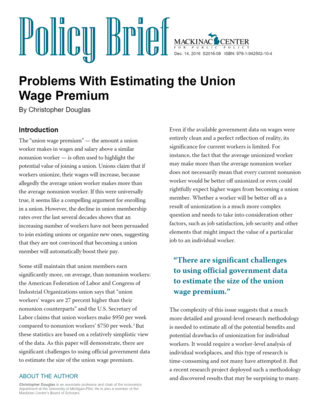