MIDLAND — A new survey released today by the Mackinac Center for Public Policy finds strong support for school choice among likely voters in Michigan, just as a new analysis finds a record 23 percent of the state’s public school children attend either a charter school or a traditional public school outside their home district.

Marketing Resource Group interviewed 800 likely voters in June 2014 and again in July 2016 and found that approval of school choice, charter schools and vouchers has remained relatively stable over that time. School choice is popular in Michigan, with more voters supporting than opposing on every question, in some cases by large margins. A majority of respondents also reject the idea that school choice hurts public schools. 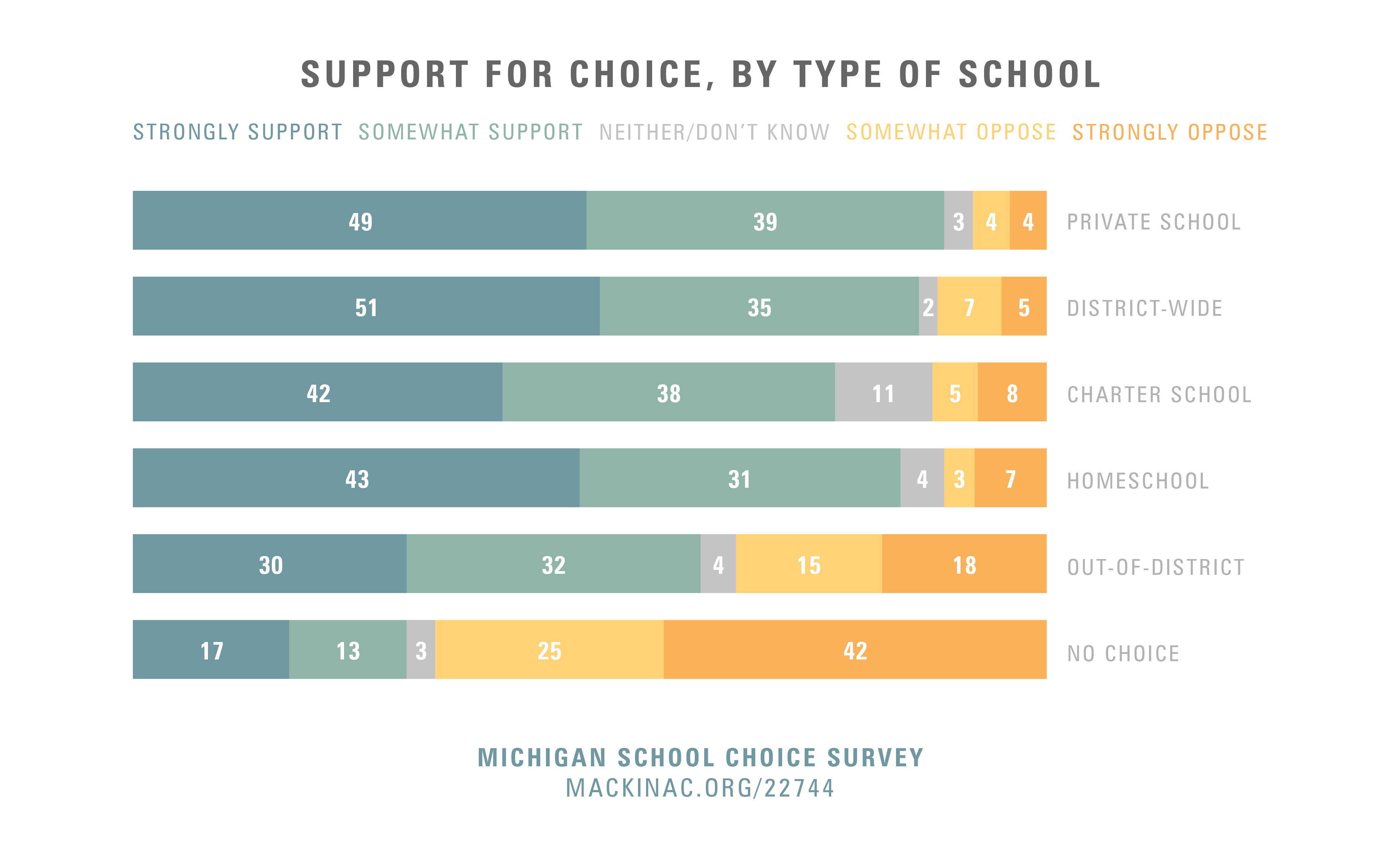 “It’s reassuring to see an overwhelming majority of Michigan voters support the idea that parents should be free to direct their child’s education,” said Ben DeGrow, education policy director at the Mackinac Center. “Lawmakers should take note that, despite the onslaught of attacks on educational freedom in Michigan, public opinion is very much in favor of school choice.”

In June, Michigan lawmakers rejected a proposal to create the Detroit Education Commission, which would have had the authority to restrict charter schools in the city. Some of the survey’s other key findings include:

“The findings of these surveys show that Michigan voters, especially minority voters, want educational choice and reject the one-size-fits-all model of our traditional public school system,” said Gary Naeyaert, executive director of the Lansing-based Great Lakes Education Project. “As we grapple with failing schools and calls for more and more funding, we should consider school choice options that have proven track records of success and will certainly garner public support.”

Live operators interviewed a sample of registered voters who have a history of voting in general elections as well as newly registered voters. The samples were stratified by geography and met quotas for gender and cell-phone use. The 2016 sample was weighted by race to more accurately reflect the voting population. With a sample of 800, there is a margin of error of +/- 3.5 percentage points with a 95 percent confidence interval.

The full survey can be found here: https://www.mackinac.org/archives/2016/Full_SchoolChoice_Survey_2016.pdf

About the Mackinac Center for Public Policy
The Mackinac Center for Public Policy is a nonpartisan research and educational institute dedicated to improving the quality of life for all Michigan residents by promoting sound solutions to state and local economic policy questions. As a free-market think tank, the Mackinac Center is guided by its belief in free markets, individual liberty, limited government and the rule of law. Founded in 1988, it is headquartered in Midland, Mich. For more information, visit www.mackinac.org.