Local governments should get out of the way of private providers 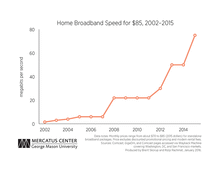 Several towns in West Michigan are considering subsidizing municipal broadband, a high-risk strategy to provide better internet access for residents. One plan to provide fiber internet in Holland would cost city taxpayers more than $60 million dollars, even if projections are met. And in Laketown Township, outside Holland, residents narrowly rejected a proposal to spend $8.6 million on a similar system.

Township officials argued that the internet is a public good, worthy of being run by the government.

“The internet is a basic,” Laketown trustee Gary Dewey told the Holland Sentinel, “and we have to provide that service.”

But the evidence shows precisely the opposite. For years, the price of a high-speed internet connection has come down substantially. And there is little evidence that municipal broadband, which has been tried, again and again, is a good idea.

A 2014 paper published by the Mercatus Center at George Mason University examined 80 municipal broadband projects nationwide over several decades, looking at 23 years of Bureau of Labor Statistics data, and found little evidence of economic benefit. The paper examined the number of local businesses, employee wages, and the number of jobs and found negligible benefits. The only noteworthy effect was on the number of new local government jobs — unsurprising when one considers that the federal government has dumped hundreds of millions of dollars into these projects.

The evidence shows that many cities have lost millions on risky public broadband systems from cost overruns, complications and unrealistic economic projections. Another problem is that these government programs often crowd out private investment.

Convincing people to switch to a government-run network is difficult, which is why these projects often fail. People often say they hate their internet providers, but a Rasmussen poll says only five percent of internet users consider their service to be poor. The vast majority rate it good or excellent.

In any case, the real answer to the question of how to make the internet better is to change local, state and federal laws to allow more market competition – not getting the government more involved. Google Fiber wants to expand across the country but is limited by local regulations and requirements. Local governments should repeal regulations blocking private investors and then focus on core services, not risky schemes with taxpayer dollars.