What Senate Bill 571 actually does 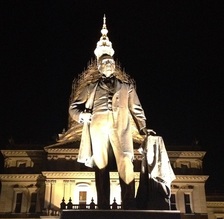 The Michigan Legislature passed and Gov. Snyder signed Senate Bill 571, which prohibits schools and local governments from using taxpayer dollars to put out information about ballot proposals 60 days before an election. In the past, these entities have used public money to advocate for higher taxes.

Here is the exact language of the controversial part of the bill:

Local government and school district leaders as well as the groups that represent many of them are outraged. Public entities say they inform voters with neutral language that is needed to educate people before they vote.

But local governments and schools go well beyond that. There are many examples of government units using taxpayer funds to advocate for more money.

Based on their main arguments, the opponents of the new law don’t seem to grasp the problem.

Robert Showers, a county commissioner and board member of the Michigan Association of Counties, wrote that it “silences me and my six colleagues on the Clinton County Board of Commissioners.” He added:

Across Michigan, there have been hundreds upon hundreds of local ballot measures since 2012. And, yes, complaints about improper advocacy were filed in some cases. After review by the state, though, the issues involving local ballot questions represent about ½ of 1 percent of all such elections since 2012. And, remember, these were caught by the law before special interests started urging legislators to pass bills they didn’t have a chance to read. The facts are clear: We local officials take seriously our responsibility to not use public resources for advocacy on ballot measures.

MIRS News notes a similar view from another group which advocates for local governments: “Chris Hackbarth from the Michigan Municipal League noted that in the last three years, the Secretary of State has only found five instances where a local government crossed the line into advocating for a local ballot question using taxpayer money.”

The problem with that analysis is that the only real limit to date on local governments is that they can’t specifically say “vote yes” for a proposal. But they have been allowed to advocate by: asking everyone to “pitch in,” “ask for your support,” “fund our future,” and “ask voters to renew.” They have been able to say a tax increase “can mean the difference between life and death,” ignore $260 million of tax increases, claim a tax increase will “boost Michigan’s employment rate and the economy,” “secure a better future” and more.

The Secretary of State is in charge of policing the campaign-related activities of local governments and MIRS News notes that, “Elections Director Chris Thomas [said the] new bill deals with what he calls ‘electioneering,’ which doesn't overtly ask for support of opposition, but leaves the reader or viewer with no other interpretation than one side of an issue. Thomas called this the ‘functional equivalent’ of expressed advocacy, which currently is not in his purview.”

When signing the bill, Gov. Snyder asked for clarification that elected officials could respond to questions about ballot proposals and give information as a function of their job. A new proposed bill, House Bill 5219, ensures that and allows local governments to send out the ballot language and the election date of proposals.

That seems like a good change to the new law, ensuring that informational language as neutral as possible can be sent out while limiting local governments from advocating for tax increases. And, of course, anyone who wants to advocate for or against a tax increase is able to do so – just without taxpayer dollars.