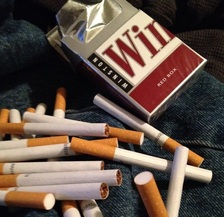 Last week, several health-related nonprofits released a poll that asked 600 voters in Michigan about the idea of increasing the cigarette tax by $1 a pack. The sponsors report strong support for an increase if the funds are channeled to health-related government spending.

But research by the Mackinac Center for Public Policy and others has shown how very high tobacco taxes come with negative unintended consequences — and don’t necessarily improve health outcomes either.

The Mackinac Center research focused primarily on the amount of smuggling these high taxes generate (also called “diversion”). The original 2008 study has been updated several times, and estimates the proportion of cigarettes sold in each state that are smuggled in to avoid high taxes.

For Michigan, the study’s model shows that as of 2013, 25 percent of all the cigarettes smoked here were smuggled in. It shows also that raising Michigan’s $2 per pack tax by 50 percent will almost certainly drive the proportion of smuggled smokes much higher — to 35.1 percent of the total market. This would put Michigan in the top five cigarette diversion states in the nation.

If the goal is to persuade people to quit by raising the price of cigarettes, it is undermined by the increased smuggling that accompanies a tax hike. The amount of new government money flowing into the health care sector from a tax hike is also likely to disappoint proponents.

Those conclusions are supported by other studies, such as one titled, “Do Higher Taxes Reduce Adult Smoking” published in the Journal of Economic Inquiry in 2014. Its authors pointed out that since current smokers have demonstrated a strong preference for the habit they may resort to the illegal market for cigarettes. Their analysis found that tax increases of 100 percent will decrease adult smoking by only five percent.

Nor will a higher tobacco tax have the hoped-for impact on smoking among young people. A 2015 National Bureau of Economic Research study found that, “Youths have become much less responsive to cigarette taxes since 2005. In fact, we find little evidence of a negative relationship between cigarette taxes and youth smoking when we restrict our attention to the period 2007-2013.”

The occurrence of smuggling also means that declines in the sale of legally taxed cigarettes do not necessarily mean fewer people are smoking. A 2005 Journal of Health Economics paper by Mark Stehr, “Cigarette Tax Avoidance and Evasion,” argued that up to 85 percent of the change in legal sales after a tax increase can be explained by tax avoidance and evasion and not by quitting.

A new 2015 study in the journal Marketing Science called “The Unintended Consequences of Countermarketing Strategies: How Particular Antismoking Measures May Shift Consumers to More Dangerous Cigarettes,” finds that higher taxes may cause people to seek products with higher nicotine content. This is especially true of people with lower incomes, they reported.

Mackinac Center research has addressed this substitution effect, citing individuals who switch to “roll-your-own” cigarettes with loose tobacco. People who do so have the option of leaving out a filter, increasing the amount of nicotine (and tar) they ingest.

This is hardly a complete survey of research in the field, and as usual with academic literature the findings can be mixed due to different data sets, time periods and other methodological differences. But the examples above represent some of the most recent or oft-cited scholarly papers on the subject.

None of this, of course, will surprise students of America’s experiment in alcohol prohibition.

The Iron Law of Prohibition states that the more intense the effort to stop consumption becomes, the more powerful the banned product becomes. For 1920s bootleggers, whiskey was where the action was, not beer, because it gave more bang for the alcohol buck.

The same goes for nicotine in an era we have called “prohibition by price”: The product may be legal, but it has been (artificially) priced beyond the reach of many who want it.

Cigarette tax hike advocates should undertake their own review of the evidence before advocating measures that may do more harm than good.